She's Faking It by Kristin Rockaway 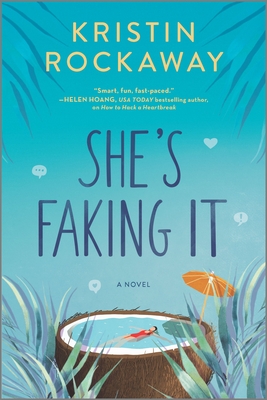 Sometimes people will ask me what the difference is between a contemporary rom-com and chicklit and while a book can be both, for me it really depends on the ratio of relationship to life development. With some books, the focus is on the romance and with others, the focus is more on the heroine improving her state of affairs or learning some kind of important life lesson. In the case of SHE'S FAKING IT, I'd say that this book falls into the latter category.

Bree is a down-on-her-luck woman in her early twenties. She's just been dumped by her boyfriend, she's behind on her student loans, she lives in an illegal apartment with bad wiring, and she works as a food delivery person (for which she gets zero respect). Due to her well-meaning boss babe sister's influence, she starts buying into the life philosophies of this self-help guru who's clearly modeled after and criticizing people like Gwyneth Paltrow and Rachel Hollis.

She starts doing brand partnerships on her new Instagram, Bree by the Sea, which ends up blowing up. But every attempt to grab fame by the bridle ends up blowing up in Bree's face, and when she gets the chance to go to a summit to meet DiPalma herself, the influencer isn't what Bree expected.

So because of the subject matter, this ended up being a frustrating read. Bree is young and flawed, and I think that this was portrayed well, but boy, was it hard to stomach. I don't think I've cringe this hard since the Shopaholic series. Bree makes so many bad choices and it's seriously hard to watch. For the most part, though, I think that all of them made sense. It was genuinely refreshing to see a character struggling financially actually show that anxiety and hyper-fixation on money, and how this makes them vulnerable to scams. I also thought the shadiness of influencer culture was really well done (although does this author seriously think self-published authors actually make thousands of dollars? I'm not mad, I just wanna talk...)

The romance was pretty lackluster and honestly was one of the weakest parts of this book. Also, it's not steamy at all. The sex is mostly fade-to-black. I'm surprised romance is the top category because it played such a minor role. More time is given to the heroine's developing relationships with her friend, Marisol, and her older sister, Natasha. Trey was inoffensive and I liked that he had a thing he was sort of working to deal with too, but as a love interest and romantic lead, he was very much bland.

Overall, SHE'S FAKING IT was... fine? It's a book that definitely goes in with an agenda but the message is definitely valid and the story was readable. I wanted to find out what happened and I liked Bree enough that I wanted her to have an HEA. I could see this becoming a forgettable summer rom-com that everyone goes to see and mostly enjoys but then immediately forgets about the following year.