What Happened to Lani Garver by Carol Plum-Ucci 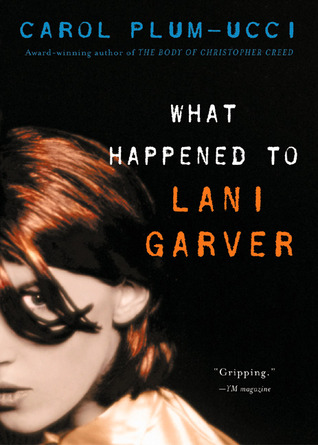 WHAT HAPPENED TO LANI GARVER is a book that I first read as an actual teenager, when I was feeling isolated from my peers and depressed. My latest reviewing project is revisiting some of the books I loved as a young woman: I'm calling it The Literary Sad Girl Canon™. It's a very important book because despite coming out in 2002 and being "a little" (read: a lot) antiquated in terms of some of the language it uses to talk about being gender-binary and the difference between gender and sexuality, it actually does talk about it - and in fact, WHAT HAPPENED TO LANI GARVER introduced me to the concept of being non-binary for the very first time.

WHAT HAPPENED TO LANI GARVER also deals with other "controversial" teen topics, like underage drinking, abusive parents, parents who abuse substances, homophobia, closeted homophobia, being "out," HIV, cancer, bullying, false memories, confirmation bias, cognitive dissonance, and all kinds of other challenging and important subjects that books at this time, again, weren't really addressing so head on.

The premise of the book is basically the LGBT+ version of the "Magical Negro" trope. Let's call it the "Magical Gay" trope. Claire McKenzie is an ignorant, mildly homophobic girl living in a podunk fishing village in Pennsylvania filled with violently and gleefully homophobic, intolerant, and ignorant rednecks. Claire is a cheerleader and all of her friends are hunky "fish frat" dudes or other cheerleaders that make up their school's royal elite. But she has a dark and edgy side to her on account of her cancer survivor and eating disorder (which she's in denial about). She plays guitar and sings songs about razorblades and thinks her boyfriend doesn't understand her because he doesn't listen to The Rolling Stones or The Who. Then Lani Garver moves to Hackett, PA.

Lani Garver is a non-binary character who is ascribed "he"/"him" pronouns in the book but never explicitly says that they identify as a boy or even want to be called a boy. They only say that they do not identify as a girl. So I am going to use "they"/"them" pronouns. Lani is the child of adoptive parents, and doesn't really care what people think about them. They have a large, lanky build but a rather feminine looking face, and while they don't really want to be in a relationship with anyone, they admit to liking both boys and girls just fine and occasionally wearing feminine clothing.

Claire's friends take issue with Lani, especially the machismo fish frat dudes, one of whom appears to be a closeted gay man who takes out his feelings by sexually harassing Lani and at one point, outright sexually assaulting them. The other people in the town warp this harassment and bullying as Lani "asking for it" by being too effeminate and sexually precocious, despite the fact that they don't present themselves that way at all and actually getting quite upset from the attention. While all this is going on, Lani takes Claire on a journey to "find herself" by whisking her off to the big city of Philadelphia, introducing her to musicians with AIDS, a therapist whose eating disorder advice is "eat a whole chocolate sundae," and teaching her the wonders of leather clothing.

I really liked this book as a teenager because it was so edgy and made me think about things that nobody was talking about, which, as a precocious "nobody-understands-me" teenager myself who also experienced a fair amount of vicious bullying in school, I related to quite strongly. The language is dated, though, as in the early 2000s, people outside the LGBT+ community didn't really have the knowledge or the linguistic tools to talk about people in the community with respect, nor did they look for it. So there's a lot of talk and language that some may find offensive, like "girl-boy" or "he-she" or, you know, the fact that Claire basically just assigns them pronouns without asking.

It was actually interesting reading this book now because at the time I read this, the concept of someone who was trans or non-binary was totally foreign to me. Now I've met quite a few people who fall on that continuum, and Claire's reactions were totally cringe, as were the questions her bitch-friend Macy asked Lani. I also didn't really like how Lani was martyred in order to teach Claire to be a better person; it felt, again, like the Magical Negro stereotype with gays, in that Lani was portrayed as mystical and wise - and at some points, Claire even wonders if perhaps they are an actual angel? (no seriously, there's a subplot in here where it's implied that Lani is a supernatural force.)

I did still enjoy this and I think it does a good job showing the mob mentality of a small town built around homogeneity and intolerance, and what sort of culture drives people to vote for a man like Trump (I have no doubts that all of those in Hackett probably would). The tough subjects and truly flawed main character were also handled pretty well for the time in my opinion. Even though it's dated, I do think it's a must read, if only because it was one of the few mainstream books at the time that I encountered that was talking about these sorts of things, and my, how we've grown.