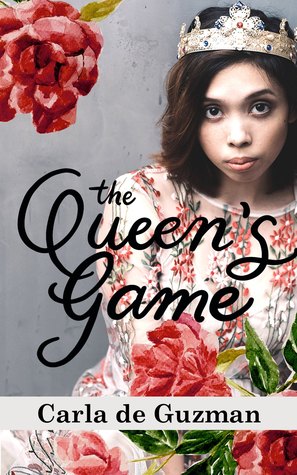 Last year, I found out that there's a whole bunch of #OwnVoices Filipinx romance novels floating around out there as part of a writing group headed by Mina V. Esguerra, called #romanceclass. A whole bunch of them went cheap or free last August, so of course, I checked obsessively every day, totally abusing that 1-click button.

THE QUEEN'S GAME is one of these #romanceclass novellas. I've read some of Carla de Guzman's work before, a friends-to-lovers romance with a plus-sized heroine called IF THE DRESS FITS. THE QUEEN'S GAME is also a friends-to-lovers romance, but it's about royalty instead of the common folk. Nina is an estranged princess of Cincamarre, returned home after the death of her father requires both mourning and acknowledgement of her succession.

Her aunt, Dita, doesn't approve of her at all. Nina is a wild child, wearing racy clothing, making out with Korean pop stars, and going to parties whenever she feels like it. Dita wants her to clean up her scandals and make a good name for herself. The best way to do that in her opinion is a fake relationship with neighboring prince, Felipe.

This could have worked out so well. Felipe was a great hero, and an unusual one. He was kind, sensitive, silly, self-effacing, and fond of farming. I actually learned some interesting things in this book, like how tomato and basil complement each other when planted together, and that there's a type of vegan leather made out of pineapples (it's called Piñatex). Felipe's family actually agrees to the fake marriage because Dita trades Nina to them for pineapples. So much for the 30 pieces of silver.

The problem for me was that the writing wasn't very good - there were a lot of mistakes and the author told instead of showed way too often. Sometimes this works, but sometimes it feels like lazy writing - and sadly, this was the latter for me. I also think that the story was way too short. I could have used more angst, more development of their relationship, more conflict. We don't see too many sexually precocious party children who aren't dragged down for their sexuality by the love interest and I would have loved to have seen more of that side to Nina, and to see Felipe come out of his shell. I liked what both of them represented, but at the end of the story they were still strangers.

I definitely recommend that you guys jump on board with the #romanceclass books because so many of them are good, but sadly this was one of the weaker books I've read in the line-up.