The Kiss of Death by Auryn Hadley 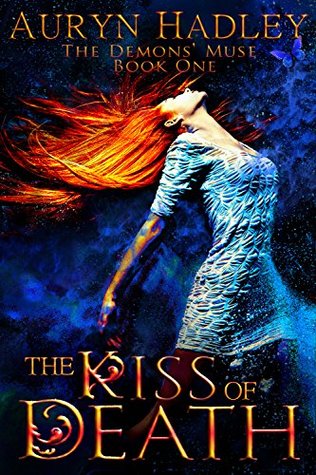 When I was a young teen, I used to go on this website called Quizilla. In many ways, it was a lot like a cross between Wattpad and BuzzFeed's quiz section, only since this was during the early 2000s, people were writing self-insert fics w/ Gerard Way and My Chemical Romance instead of Harry Styles and One Direction or BTS, and instead of Twilight, it was Louis and Lestat from Interview with the Vampire and they all spoke in butchered French. If vampires and emo boys weren't your cup of tea, no problem, you could read anime fanfic, anime-inspired fic, take quizzes, or read original fiction with titles like Lust for a Young Girl's Blood; Help I'm a Girl in an All-Boys' Boarding School; or Would an Angel, a Demon, or Vampire Fall for You?

Quizilla is now defunct but my memories of it are not, and I'm always delighted when I come across a story that captures the zeitgeist of my Quizilla days. I was thinking, while reading THE KISS OF DEATH, that I'd never read a reverse-harem story, but that's not quite true. In my Quizilla Days, there was a veritable pantheon of fratty immortal cadres falling for human girls.

THE KISS OF DEATH stars Sienna, a human girl putting herself for college while working at a bar. She also has a jerk boyfriend named Aaron (Aaron is such a jerk name). On her first day of classes, she runs into not one, not two, but three hot guys in all her classes (hi, obligatory nod to TWILIGHT) and then they all show up coincidentally at her job later, where they all leave her really big tips. It turns out that these guys - Sam, Luke, and Nick - are Samyaza, Lucifer, and Sataniel, demons who are looking for her because their enemies, the angels, are looking for her, too.  Because Sienna isn't a human girl, after all. She's a Muse, with the power to manipulate aether, the substance that souls are made of, and that borders and gates the many worlds. And people want her - or want her dead.

So, yes, it's a little bit Mary Sue-ish. A little bit. Normally this is something that bothers me, but I honestly loved it here. It's pure escapist fantasy. Sienna has cool powers, magic art skills, and a whole harem of immortal hot guys who treat her nicely and are willing to die for her. What really saves this story is the smart writing and the science and philosophy the author imbues the story with. Hadley really tries to make this more than just romance with plot, and it's damned creative.

It's also... well, some might say it's blasphemous. If you thought the movie Dogma (1999) was funny, you'll be fine, but that should be your litmus test. Can you stomach the thought of angels and, yes, even Jesus, being the bad guys? I look at Christian theology the way most Christians probably look at Greek mythology, in that I'm like, "Oh, how interesting, how dramatic, how antiquated - I'd like to learn more about this maybe, and read some books about it, but I would never believe in this." I thought the book was great, but I noticed some religious people in the reviews weren't happy with the content. So if you are very religious, and can't laugh at your doctrines, maybe you should stay away.

I honestly can't remember the last time I had such mindless fun reading something. THE KISS OF DEATH was so compulsively readable that I finished it in just over a day, even though it's long. I'm new to the burgeoning reverse-harem craze happening on Goodreads, and I don't think I'll be a stranger from now on. Not if this book is any indication of what I've been missing out on.