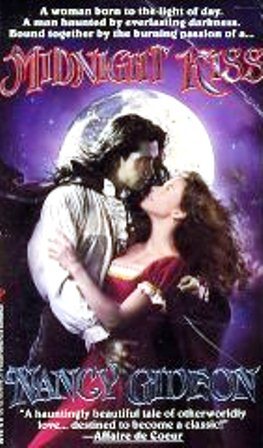 I would be shocked if Stephenie Meyer hadn't read this book because the similarities between MIDNIGHT KISS and TWILIGHT are so similar.

🦇 The heroine is named Bella.
🦇 Bella is bookish, awkward, and doesn't think she's pretty.
🦇 The hero is an angsty mess who hates being a vampire.
🦇 The heroine has a rapey family friend her father would rather she be with over her vampire love interest.
🦇 The heroine's father is not a great father, spends all of his time working, and shows way too little concern for her.
🦇 There's a male and female "bad" vampire duo who have it in for the hero and the heroine.
🦇 The bad vampires kidnap Bella at the end of the book to lure in her vampire love interest, who they want to kill.
🦇 Bella ends up pregnant with a vampire baby.

I rest my case.

MIDNIGHT KISS came first, but as much as I wanted to love the OG, TWILIGHT did it better. And it's funny because I was just thinking the other day about how TWILIGHT was such a game-changer in the paranormal genre. Before TWILIGHT, I think people tended to write more about the traditional vampires who were either soulless, horrific killing machines, or Broody McBroodersons who spend all their time brooding about their lost humanity and how they will never feel the touch of the sun's rays. :tear: (Also, making your vampire hero a Broody and naming him Louis? Ballsy.) TWILIGHT gave the green light for people to write about "alternative" vampires who were basically just the cast of Beverly Hills: 90210 with fangs. That's basically what Vampire Diaries is, FYI.

The difference between MIDNIGHT KISS and TWILIGHT is that MIDNIGHT KISS relies more on traditional vampire folklore. These vampires are sensitive to silver, garlic, and crosses; they don't have reflections; they can control minds; they can turn into mist or beasts, as well as drink blood; and they float sinisterly. This had the making of a great story, but it just wasn't dark enough. I also didn't really like all the whining that Louis did. He meets the heroine because he's seeing her father, who's a doctor, and seeking treatment for his "blood condition." Her father has sort of had a breakthrough, able to sate his hungers through transfusions, and quell his symptoms with a drug, turning him almost but not quite mortal. Obviously, when the hero and heroine meet, it's love at first sight, but for someone who's so smart, she doesn't figure out what he is until the very end of the book. Christ, adult Bella. Teenage Bella was way quicker on the uptake than you, and that's saying something.

There's a lot of weird side plots that go nowhere, too. Like the rapey love interest deciding that he's going to ruin Louis and leverage Bella's father's secret to further his career. The evil vampires, Bianca and Gerardo, are introduced so late, with so little foreshadowing, that they aren't quite the menace that Victoria and James were in Twilight, nor is the final showdown as epic. There's also an evil resurrectionist that Bella's father uses to illegally procure dead bodies for his experiments, but he dies and then later becomes a revenant, but like all other threads in this book, it's resolved too quickly.

Props to MIDNIGHT KISS for being a paranormal romance in a time where paranormal romances were not nearly as abundant and trying to go for the classic Gothic vibe. I wish it had succeeded, because nothing makes me as giddy with joy as being able to find and promote a romance that nobody else has heard of, but for me this book was a miss. If you're looking for a Gothic historical vampire romance, you'd be better off picking up Susan Squires's THE COMPANION, instead.