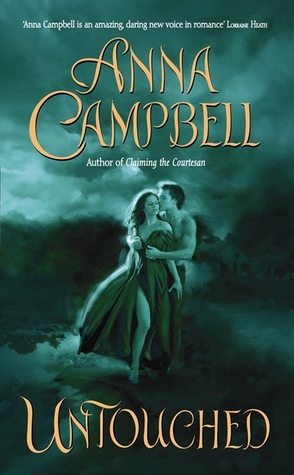 💙 I read this for the Unapologetic Romance Readers' New Years 2018 Reading Challenge, for the category of: Virgin Hero Romance. For more info on this challenge, click here. 💙

So I guess Anna Campbell (no relation) went through this phase where she decided to make bodice rippers "happen." The first book written in this vein was called CLAIMING THE COURTESAN and it very much wants to be one of those I'm-so-alpha-that-I-piss-iron-tacks bodice rippers of the 1970s...only in a fluffy, romantic way. (So basically, it sucked.) I was leery of UNTOUCHED, hoping that it wouldn't be more of the same - but fear not! Because this book is much better than its predecessor, with a far better story, to boot!

Grace Paget has had a pretty awful life. She's been estranged for her family for years for marrying this religious fanatic who was many years older than she was. Now he's dead, and with nowhere to go, she plans to go stay with a distant relative. Unfortunately, she's kidnapped before she can reach her destination, and spirited away to a remote manor.

She finds that she has been mistaken for a "whore" and taken here to be entertainment to the "mad" marquess by said marquess's cruel uncle. But the more she talks to the marquess, the more she realizes that he really doesn't seem mad. However, since his uncle controls his fortune for as long as he remains both alive and unfit to manage his own affairs, Matthew is completely in his uncle's power - and if Grace doesn't warm his bed and keep him complacent, she's going to be killed.

There's a really great Gothic vibe to this book that kind of reminded me of Maire Claremont's THE DARK LADY. Both characters are sympathetic and you can't help but feel for the awful situation the two of them are in, particularly as the situation grows more and more dire. The sex scenes are scorching hot and I liked the fact that the hero (not the heroine) was a virgin.

I gave this book three stars because the romance was a little too cheesy considering the dark content of the rest of the book. Some of the sex scenes were also a little too flowery for my taste, but that appears to be Anna Campbell's style, and she made it work here (it was worse in CLAIMING THE COURTESAN). I also felt that Matthew warmed to Grace far too quickly, considering how suspicious he was of her in the beginning (and with good reason). It would have been better if the evil uncle's presence had been more "known," so the reader could really feel the pressure he exerted.

Overall, though, this was a decent book. One of the best by this author that I've read in years. If you were burned by CLAIMING THE COURTESAN and found yourself loath to try another one of her works, let me be the first to assure you that this is a vast improvement over her previous work.