The Prince & The Player by Tia Louise 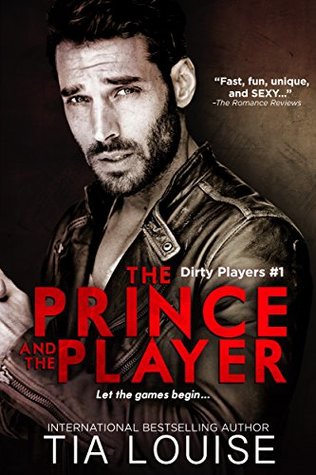 My new friend Brandy and I decided to BR a royal romance in honor of the Royal Wedding and this was a Kindle book we both had sitting on our Kindles. I'd never read anything by this author before and to be surprised, I was kind of surprised it was a romance about a prince because the dude on the cover looks more like a well-groomed biker or a rock star, but hey, to each their own. Maybe he'd be a sexy rebel cast in the mold of Harry Windsor and I could get my princely fix.

This is so stupid. It's about two scammy sisters named Zelda and Ava who like to go to casinos and scam money. They're con artists. One day, they go a scam too far and end up catching the attention of this exiled dude from a made-up country named "Monagasco" (a portmanteau of Monaco and Madagascar?) who blackmails them into agreeing to cozy up to the prince of Monagasco, or else he'll report them to the casinos for fraud, etc.

I stopped reading when the prince encounters one of the sisters (Ava, I think) standing outside on a balcony reciting poetry to herself during a big party. Honestly, that was the straw that killed it for me because that was so unbelievably stupid. Who does that? I mean, seriously. This book was just one big suspension of disbelief after another. I'm already kind of suspicious of made-up countries because that, to me, is indicative of lazy writing (i.e., "I don't want to do any historical or cultural research, so I'm going to make something up"), and the culture and history of "Monagasco" was super vague. Why do they speak French, for example? Why not a made-up language? Monagascese?

The prince, what's-his-name was also super-skeazy. He's basically a NASCAR driver; he spends all his time racing. Which, I'm pretty sure a prince would probably not be allowed to do because of the danger factor. I don't think hobbies that could kill the heir apparent would be encouraged. Also, he and his brother (or was it his cousin?) brag about their conspicuous bad-boy activities, like orgies and cocaine, and I'm just thinking, "Cool, so the major export of their company must be tabloids, because who the hell lives like this sustainably and where are they getting the money for these activities?"

And then I got to the poetry on the balcony scene and I was done.

This is just another one of those basic romances with poor quality writing and uninspired characters. It almost reads like the author had two disparate ideas and just decided to cram them into one book. Spoiler: it didn't work.

I don't think I'll be reading anything else by this author.