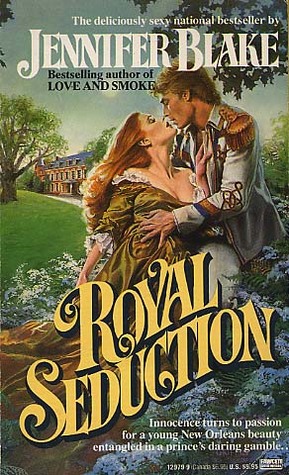 Before I get to the review itself, I want to take a moment to appreciate Jennifer Blake. Her books are constantly showing up in the Kindle freebie section - and not just for a limited time only to promote a sequel or a reprint, no. Four-book bundles, entire series, new books, back-list titles, she puts EVERYTHING up there at one point or another. I can only imagine it's because she genuinely enjoys seeing people reading her books for the sake of reading them, even if they don't pay for them, and I think that's amazing. I wish more authors did that - especially older authors who are re-releasing titles that have been out of circulation for decades - because it's a great way to try something new and it also just really shows an understanding that a lot of us bloggers do not have infinite monies to spend on books (sadly).

So here's to Jennifer Blake. Usually I hoard my Kindle freebies forever (or until someone corrals me into a buddy-read), but I've decided to binge as many of her titles as I can to show appreciation for the authors who have a love for their craft - AND their fans.

ROYAL SEDUCTION came to me in a two-book anthology that showed up - FOR FREE - in the Kindle store called Royal Princes of Ruthenia Box Set. It's not exactly a catchy title, but it was free, dammit, so I downloaded the box set and promptly forgot about it until now. The concept is actually shockingly titillating: Rolfe hails from Ruthenia, a made-up country in the Balkans. His brother, Maximilian, the heir apparent, has just been murdered - and he thinks it was his brother's mistress.

Cut to the American South, where Angeline is courting the toast of society under the resentful care of her aunt. When Rolfe bursts in to one of the family galas and immediately confronts her, she realizes at once that he has mistaken her for her worldly cousin, Claire. Rolfe thinks she's lying to protect herself, though, and after chasing her down through the woods on horseback, ends up abducting her and taking her to a remote apartment, where he proceeds to take her against her will. When he realizes she's a virgin, he understands he has made an error, but rather than doing the humane thing and feeling bad about it, he continues to abuse her, in the hopes that she'll betray her cousin.

I realize that the "forced seduction" (let's call it what it is, rape) is going to put some people off from reading this and I totally understand, believe me. This is one of those ways that you can really feel the 1983 publication year's influence over the story. I don't mind that trope if it fits the story and the characterization, myself, and Rolfe's icy, entitled brutishness? Yeah, he would so do that. He's a bastard. He's also a silver-tongued devil, and basically every word that comes out of his evil, beautiful mouth deserves to be turned into word art on Instagram.

Jennifer Blake really reminds me of Rosemary Rogers in some ways - the gutsy heroine, the evil hero with the psychotic streak, the swashbuckling and knife fights, the constant parade of evil (and often ethnic) villains, the double-crosses, the triple-crosses, the hot sex, the enemies-to-lovers trope... it was classic RR, which makes me happy because I love that woman's writing and she's pretty much unparalleled when it comes to writing addicting romance stories. At least, she was unparalleled until I made my acquaintance with Laura Kinsale's and, now, Jennifer Blake's dark and twisted tales.

I could sit here and yap on and on about how great I thought this story was (obviously I did, it was great), but you should read it and see for yourself. It was so much fun and I think I'd probably come back to it again just to get a reprise of some of Rolfe's Greatest Hits of Eloquent Insults, Vol. 1™.