Asleep: The Forgotten Epidemic That Remains One of Medicine's Greatest Mysteries by Molly Caldwell Crosby 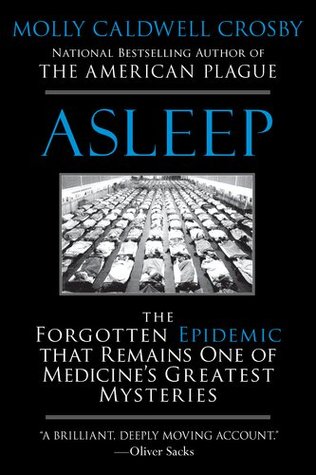 Reading a book about a disease that makes people go to sleep and never wake up again is probably not the best bedtime reading, but when it comes to books, I often make bad choices. In case you couldn't tell from the title, ASLEEP is about the sleeping sickness, also known as encephalitis lethargica, literally Latin for "that thing that makes your brain swell and makes you sleepy." It's a disease that's mostly been swept under the rug and in this book, which sews together the case studies of several people who were afflicted with the disease, Crosby discusses the "mystery" behind enchephalitis lethargica and how it affected the infected.

For the most part, I thought ASLEEP was an interesting book and devoured it fairly quickly. Sometimes these medical history books can be too gruesome for me and yes, what happens to the victims in this book is truly awful (one case was particularly horrific, and I remember reading about that particular incident in one of my psychology textbooks in college as an example of how hospitals should exert more rigorous supervision over patients with a tendency to self-harm).

ASLEEP is a bit of an unsatisfying read though for two reasons. First, it's a mystery without a satisfactory ending. Doctors still aren't quite sure what caused the sleeping sickness, and while there are theories (autoimmune response? multiple diseases acting in tandem?), there is no solution. Contrast that to another medical mystery book I read a while ago about prions, where the book builds up to that one "eureka!" moment where people realize, "hmm, maybe eating brains is a bad idea!"

The second aspect of this book that was a bit of a downer for me was the way that the patients themselves were discussed. This book did not really read the way a psychologist or psychiatrist would talk about patients, and I looked up the author and it appears that she is a journalist with no psychology background that I can see (seems that she has a Master of Arts). I bring this up because one of the things that they teach you in psychology (or any other medical-related science) many, many times is to not fall into the trap of defining people by their disease. People make fun of PC-language but addressing people by the correct labels shows respect, and feeling that you are a respected human being is crucial to healing. Each case study is portrayed as a distinct "before" and "after" with the "before" being held up as the ideal and the "after" being this utterly ruinous thing that destroyed their lives and made them shattered shells of their former selves, etc. and I could almost hear all of my psych professors collectively groaning in my mind. This other review by Talulah on Goodreads goes more into depth on the specifics of the language used to describe the patients.

I realized that something about this book was putting me off and didn't realize what it was until I read the epilogue (which ties back to the prologue) about how the author's own grandmother being afflicted with sleeping sickness was one of the inspirations for her writing about the disease. I thought that was really interesting until I read the end part about how her when her grandmother was dying, she was trying to think about something to remember her by as a person but couldn't get over the empty space the disease had left in her (paraphrasing). Annnd that's how the book ends. On that note.

I did enjoy ASLEEP but the writing could have been less sensationalistic and more delicate in how it handled the cases of the various patients who had the sleeping sickness. I get that this book is older, and people know more about the importance of proper "labels" now, and even Oliver Sacks, who endorsed this book, comes across as comparatively insensitive in his oldest book, THE MAN WHO MISTOOK HIS WIFE FOR A HAT, when you compare it to some of his more recent titles. Psychology is a new field and it's changing so fast that by the time some people finally feel competent to talk about it, some of the terms are already out of date. I mean, I still see people who make jokes that schizophrenia means multiple personality (it doesn't) or that you only use 10% of your brain (good luck with that). All it takes to change that is a little research and extra care.