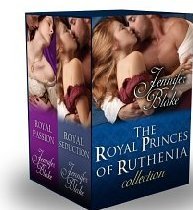 I can't stop staring at the way that the box set is positioned in this photo because if you look at it from the side, it kind of looks like historical menage, with the dark-haired woman slowly edging in one the red-haired woman and the dark haired man, like, "I want in on that action! Is there room for one more?" Only it's kind of creepy to think about, because that woman is her godmother (more on that).

ROYAL PRINCES OF RUTHENIA is a duology by Jennifer Blake. The books are set in a fictional Balkan country called Ruthenia, and the hero of each book is a Ruthenian prince. Initially I was skeptical because I think the last historical romance I read that was set in a fictional country was by Christina Dodd. It was not good.

These books surprised me, though - both of them are beautifully written and the first one especially has amazing dialogue. The sensory descriptions are vivid and poetic, and I can't imagine how much research went into these books because the gala scenes, fight scenes, and day-to-day scenes are equally well done. So is the sex, if you're into that sort of think, wink, wink, nudge, nudge.

This book was close to perfect, and you should really check out my full-length review on that book's page. ROYAL SEDUCTION is very much a classic bodice ripper, written in the vein of the other greats, like Rosemary Rogers or Laurie McBain. The writing is especially lovely in this book and the hero and heroine's witty repartee flew off the pages. There's a lot of sex but the romance doesn't really happen until later, because it's enemies to lovers - the hero thinks first that the heroine killed his brother, and then that the heroine is covering for the person who did. So yeah, he's not happy.

I seriously can't say enough about this book, although I would caution you that it does have forced seduction, so if that's something that upsets you, you should probably keep that in mind. It doesn't happen just once, either, but I personally felt like it fit the story, and that the hero was definitely being portrayed as a not-nice person for doing it. At its core, this is a book about vengeance and betrayal, so many of the bad things that do happen fit the theme of the story and the ruthlessness of the characters.

NOOOOOO, the first book was so good that I immediately launched into this one, and I couldn't believe the dip in quality. I don't think I've been this disappointed by a bodice ripper sequel since reading Rosemary Rogers's DARK FIRES after SWEET SAVAGE LOVE.

ROYAL PASSION is set thirty years in the future after ROYAL SEDUCTION and the hero is actually the child of the first couple. Overall, the plot kind of reads like a pale imitation of the first book: hero and heroine at odds, court intrigue, betrayals, final confrontation, near-death experience, nursing back to health, pledge to love one another forever and ever, etc.

There's also a shift in tone, which I think will please people who don't like the bodice ripper formula (e.g. bad things happening to everyone, all the time), but for me it felt really weird and jarring, because the first story was so dark and now suddenly we have secondary AND tertiary romances to pad out the plot, as well as animal sidekicks and villains who LITERALLY look like the devil. I go into more detail about my thoughts on ROYAL PASSION in my Goodreads review, but the TL;DR version is that I was expecting so much more and was delivered so much less. Boo.

I was pretty disappointed with ROYAL PASSION, but I'm rounding up for the hot lovins.

Overall, ROYAL PRINCES OF RUTHENIA was a fun, quick read. I got through this box set in just a couple days. Usually I say, "Go for the box set!" because it's such a great deal, but I feel like in this case, I'd advice you to just pick up the first book and have done with it. The first book is AMAZING.