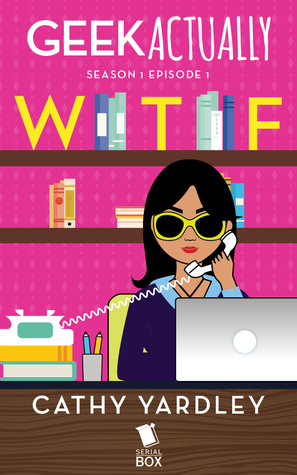 Props to sraxe for bringing these books to my attention. This was precisely the pop-culture-laden, girl-power fueled, PoC-repped piece of chick-lit crack candy that I didn't even know I'd been craving this whole time. Emphasis 'piece,' because these stories are apparently being released serially, one tantalizing chunk at a time.

There isn't really a plot in WTF. It's more like a slice-of-life story about several different women. Picture Sex and the City, except with geeky women.

+: Michelle is a Filipina science-fiction editor for a publishing company. She does a lot of hand-holding and sometimes doubles as a bounty-hunter, tracking down clients when they go AWOL instead of submitting their drafts.

+: Aditi is one of those AWOL-going writers that Michelle deals with. She initially intended her book to be a standalone and is now stressed because she was only able to sell it as a series, and has no idea where she wants to go with it. Aditi is Indian. She has a very interesting marriage, and some very interesting relationship quirks.

+: Taneesha is a video game programmer for a gaming company that was just acquired by a larger media company. The hierarchical tree is shifting, and she's annoyed to learn that she's about to be screwed. They're keeping her on as a token because she's a woman and black, and increasing her pay to keep her happy, but they're also taking away the responsibilities that gave her challenge and meaning. She is understandably frustrated and annoyed by this. I would be, too.

+: Elli works at a coffee shop where she is routinely hounded by creeps when all she really wants to do is play Pokemon go. She is Jewish (and celebrates Purim!), but she's also the quintessential millennial slacker who doesn't want to work in a cube or follow a routine - all she wants to do is geek out and go to conventions and basically live life by her own schedule.

This was so short. Like, under 100-pages short. I was skeptical about how much Yardley would be able to accomplish in so few pages. I was wrong to doubt. I may have found a writer who rivals Queen Courtney Milan when it comes to owning the "short and sweet" side of fiction. Each character is nuanced and developed, and all the pop-culture references are seriously on fleek. Their problems are relatable, and best of all, Yardley manages to discuss a lot of important feminist issues without being preachy or relying on straw men. Please tell me this is going to be optioned as a TV show. I would watch the static out of it.

I can't wait to read the next two books (which I luckily own!)