The Broken Ones by Danielle L. Jensen 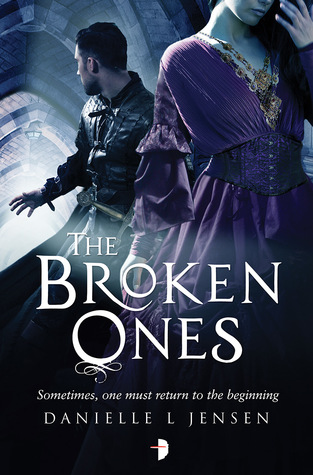 I've been feeling nostalgic for Labyrinth and David Bowie, and as if my subconscious mind registered that on some level, I've read three books about goblins over the past few months. One of them, the obvious - WINTER SONG - was a glaring disappointment. The other two (including this one) were okay. It's hard to compete against David Bowie in a mullet. (I bet you never thought you would see those words in print, huh?)

THE BROKEN ONES is the prequel to Jensen's Malediction series. Only - apparently it's not supposed to be read as a prequel because the author says that in terms of reading order, it should be read after book two. Oh, really? Because if that's the case, why is its series number #.06 instead of #2.06? That's just...silly.

Despite the reading order confusion, I enjoyed THE BROKEN ONES. The world building is a bit confusing jumping in, but I quickly got the gist of it. It's a star-crossed love story between two trolls named Penelope and Marc. Both of them are outcasts: Marc because he's scarred and unattractive and Penelope because she has a curse that will make viable offspring a difficulty. They're both painfully, idiotically, head-slappingly naive, and because of that, end up as pawns used by their noble families, to gather power and stage various coups as a rebellion of the ill-treatment of half-breeds slowly gains in pressure, ready at any moment to explode.

The way that power and court intrigue are used in this book reminded me a lot of Marie Rutkoski's Winners Trilogy. Penelope's father, especially, always seems to be two steps ahead, and will seemingly stop at nothing to find out the identity of the traitors leading the rebelling, even if it means one or both of his daughters' deaths. Anais, Penelope's sister, is the one with the spine in the relationship. Penelope is the sensitive, artistic one who always seems to be crying or being manipulated by someone else, even the people who claim to love her. Marc's voice is very similar to Penelope's, because he's torn between his allegiance to Prince Tristan and to his friends Anais and Penelope. Because of that, and his insecurities with his own appearance, he's just as easy to manipulate as Penelope. To be honest, I didn't really like either character and wasn't that impressed with their romance. It was the intrigue that made this book for me. Had the characters been even slightly more interesting, I would have loved this as much as The Winner's Trilogy. But, alas.

I recently bought the entire Malediction trilogy because it was on sale for Kindle. I'm interested in reading more of this world now that I have a handle of it, especially because Tristan is the hero in those books and based on his characterization in this book he seems like exactly my cup of tea: a brutal but powerful antihero whose ambition often makes him seem (or even act) cruel.

Read this for the intricate plotting, not for the characters.