Be Like Bill: The Internet's Smartest Sensation by Eugeniu Croitoru 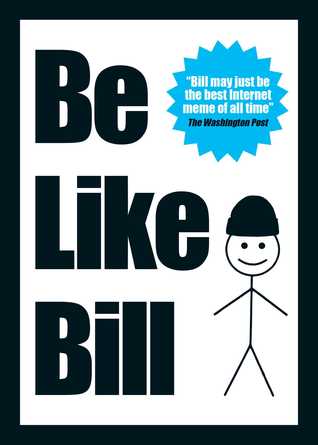 This is yet another one of those "let's make an internet meme into a book" sorts of deals, which I always have mixed feelings about because it takes several years to publish something so by the time the meme book gets published, the meme itself usually isn't popular anymore or is on the wane. It actually took me a moment to remember what Be Like Bill was referring to. In case you forget, too, a couple years ago, Be Like Bill reached critical mass. It was an ideal tool for calling people out in a socially acceptable way on the internet, and lord knows, we are always demanding new ways of doing that, because for as long as there is an internet, people will use it for calling out.

BE LIKE BILL is better than most meme books I've read, although like most meme books, the user generated ones are better (probably because you have a greater number of people contributing to the pool, so the ideas are more likely to be fresh). I'm not sure if the two authors generated all these memes, but most of them felt pretty safe and boring, and a couple just seemed petty (but then, we've all got our pet-peeves, so I'm not here to judge). Only one made me laugh out loud:

Bill wakes up and sees it's snowing outside.

Bill doesn't feel the urge to post a status about it on Facebook because he knows his friends also have windows.

Bill is not a douche.

I feel like it would have been better if the authors had done a "best of" compilation, curating some of Bill's greatest hits from the Facebook pages they manage (and maybe giving the users credit at the bottom with their permission). This was just sort of bland, and while a couple were amusing and had me going, "Preach!" the vast majority of the collection barely warranted a smile. Still, it was nice to revisit an old meme that I'd half-forgotten and get a few chuckles out of it.