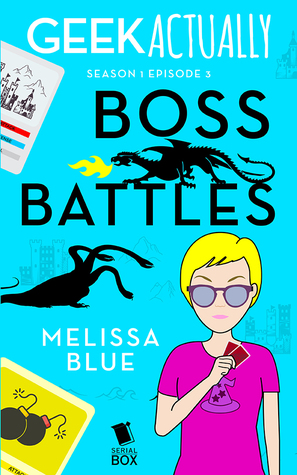 Things were going so well with this series - we had something good, we got each other, we were falling in love...and then I got to BOSS BATTLES, and it was like the series got "too comfortable" and stopped making any effort in the book-reader relationship.

First, let's give credit where credit is due. Geek Actually is such a great premise. It follows a group of women, of various ethnicities, creeds, sexual orientations, and job occupations, who are friends despite their differences. Their stories are told in serialized form, which I'm a sucker for, because I grew up on Questionable Content - the webcomic that gave me the stories I craved before I even knew I was craving them. Geek Actually does the same thing with women in the emergent information-technology culture. In one of my other reviews for Geek Actually, I described this series as being like Sex and the City, but for geeks. Sounds amazing? That's because it is. Or was, rather, until things began to fall apart in this latest chapter.

I think part of the problem might be that each of these "chapters" is written by a different author. The first two were cohesive and meshed well, but this one does not. At all. Because the chapters are so short, each book focuses on a small selection of the women, with the others only popping in. This installment focused on Elli, Aditi, and Taneesha. Unfortunately, the short chapters also showcase the difference in writing style between the three authors and make any flaws even more visible.

Taneesha was one of my favorite characters in the previous two books. She's a black female coder, and her company has just been purchased by a larger parent company, causing rifts within the company hierarchy and displacement of the responsibilities that previously gave her a sense of meaning. I looked forward to her chapters, because not only is she in STEM, her chapters also stirred up a lot of important dialogues about sexism, racism, and what they mean for a woman who has a job in a traditionally male-dominant environment. It was great. She was great.

In BOSS BATTLES, she's made into a stereotype of herself, and these important dialogues are only casually referenced with obligatory name-drops of black culture while sexism is treated with haughty eye-rolls (figuratively). It felt very awkward, especially since a potential love interest is introduced in BOSS BATTLES, and the two things I mentioned before play a key role in their interaction.

Aditi's chapter had similar problems, with her Indian cultural identity played on with many references to various types of Indian food and references to an arranged marriage. Speaking of marriage, in one of the previous books, it's hinted at that Aditi might not have a traditional marriage. I was curious about the mystery behind that - well, this chapter reveals all, and that was yet another thing that made me side-eye the book a little. It's something that I'm sure happens, but again, I'm not sure it was handled as well as it could have been. I'm curious what others thought about this.

Lastly, Elli - my least favorite character, which is unfortunate because she's the character who shares so many of my hobbies. Elli, who can't keep a job and shirks responsibility. In previous books, I sort of related to her, even if I didn't like her. In this book, she becomes a complete idiot. Her newest job in this book is to work at a mattress store. Elli ignores her new boss while he gives her instructions, then turns the mattress store into a freaking B&B, inviting customers to sleep on the beds between 20 minutes and an hour, while saying the most cringe-worthy things to them. Oh. My. God.

Don't get me wrong; I love this series, but this book was a major slump in overall quality. It lacked the cohesion that made me appreciate the first two books so much. I'm hoping I'll be lucky enough to receive advanced copies of the next books in this series, because I'd love to see where my favorite (and least favorite) characters go from here. I just hope they mesh better with the narrative.

Also, there's something weird going on with the text in all three books that I received from Netgalley. I got advanced copies, so my edition is probably not going to be exactly like yours, but in my advanced copy, there was something funky going on with the line spacing and paragraph breaks. This should be looked into. It definitely impacted readability.