Soft Apocalypse by Will McIntosh 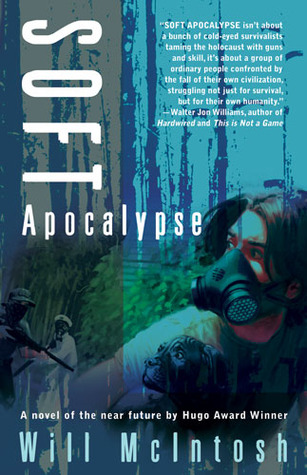 With Halloween on the horizon, the books I've been reading have definitely taken a dark turn. SOFT APOCALYPSE was a book I added years ago but only purchased fairly recently. I liked the idea of the world ending not quickly and all at once over a single event, but slowly wasting away as we carelessly burn through our resources. Actually - on second thought, maybe liked is the wrong word. Let's say intrigued by, instead.

I read McIntosh's newest effort, BURNING MIDNIGHT, earlier this year and thought it was quite creative, but suffered towards the end. I checked through spoiler-laden reviews of that book and noticed that one common complaint was that people really did not like the climax. Funny, that's how I felt about this book! BURNING MIDNIGHT was okay - maybe that's because it was geared towards a younger audience, more fantastical, and altogether less grim - but SOFT APOCALYPSE went from being fascinating to tedious in a drastically short period of time.

Our hero, Jasper, is part of the problem. When we first meet him, he's a youngin' just out of his teens. By the end of the book, he's a middle-aged man. He keeps making the same mistakes, over and over. Mostly - especially - with women. He cheats with married women, has friends-with-benefits sex with convenient women. Guilty but wrong sex with sociopathic women. Then he finds the love-of-his-wife woman, only to get her killed. But it's okay, spare love-of-his-wife woman just walks in.

I also really had to work to suspend my disbelief with some of the things happening in this book. In the beginning, everything was fine. The scarcity for resources, the conspicuous consumption of those who had energy and food to burn, and the racism/in-groups biases occurring because people were looking for a scapegoat were all well done. I had problems with the constant biowarfare and the Evil Government stereotypes. Some of those viruses were just ridiculous. I mean, Doctor Happy? Plus, it was hard to take the government seriously and with fear if they didn't even appear in person to show up and start oppressing people.

My two chief peeves in this book were probably a) that the focus of the book seemed to be more on the character's bad relationships with women rather than the dying world he was lost in and b) the multiple time skips in the book. Chapters were not linear. Time would jump ahead by weeks, months, or even years! It was very disorienting and while I get that it was probably done in the interest of time, I think a more cohesively written book wouldn't have needed all those skips - or at least, had them happen more gradually over the course of a longer, better developed novel.

SOFT APOCALYPSE was a disappointment. It isn't a terrible book but it won't be making any of my top ten lists either, and I didn't think it contributed to the genre in a fresh and interesting way.