Mistress of the Moor by Abigail Clements 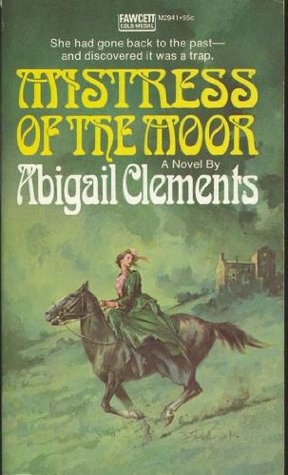 We've decided to do a Halloween 2016 Reading Challenge in the Unapologetic Romance Readers group, which means spooky themed romance reads for October. Gothic romance was kind of a shoo-in for me, because I have several of these gorgeous, retro beauties just floating around my bedroom. MISTRESS OF THE MOOR actually came to me for free, as one of those so-obscure-and-so-old-even-the-library-doesn't-want-it-type deals.

MISTRESS OF THE MOOR is set in Edwardian England. Emma Waldon is a typist, who is summoned back to the Goathlands by her uncle, the baronet, for some unspecified but top-secret purpose. It turns out that he has been badly disfigured in a fire and is working on building an airplane with the help of the darkly handsome Roger. He wants Emma to type up their plans because yay, free labor.

Right away, however, strange things start happening at Goathlands and Emma starts to suspect that there is someone there who might have reason to scare her away - or maybe even kill her. But who is that nefarious person? Is it Roger? Her uncle's female physician? Her cousin? Or could it be her maliciously compliant servant?

A lot of these old-timey gothics are hit-or-miss with me. The only ones that I've consistently liked are by Victoria Holt, and even she's written some stinkers. MISTRESS OF THE MOOR was bad, though, even by my standards. Think Phyllis Whitney at her worst. The story line is tedious and dull, and the book's most sinister moments are laughable. At one point, the villain actually tries to intimidate Emma by cutting up her childhood teddy bear and spelling out her name with its fur on her wall. I'm sorry, but that's a Pinterest project gone wrong, and not a viable scare tactic. For shame.