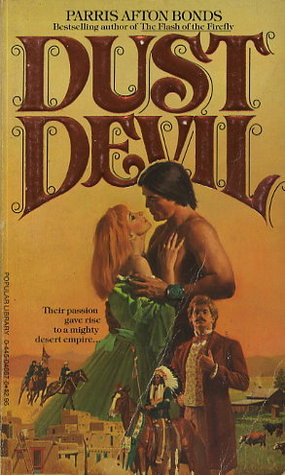 Bodice rippers from the 70s & early 80s are somewhat infamous for being violent, rapey, politically incorrect pieces of literary trash, and DUST DEVIL is no exception. It's been a while since I encountered a book that gave so few f*cks when it comes to the well-being of its characters. Parris Afton Bonds probably goes out to coffee with George R.R. Martin and the two of them just hobnob it over the atrocities they inflict upon their characters. "Red Wedding?" Bonds might say, scoffing. "One of my characters forces his wife to watch as he publicly castrates her lover when he catches them cheating!"*

*So yeah, that happened.

I normally try to not give spoilers, but bodice rippers are the exception because a) most of you probably aren't going to read these and b) the devil's in the details as far as these books are concerned, and you really don't get quite the same effect without knowing just what, exactly, makes these books so messed up. I read them, so you don't have to. It is my gift to you.

But you should know that this means major, major spoilers.

DUST DEVIL (which is a pretty lame title, because dust devils aren't really that threatening or imposing) begins in the late 19th century. It's a multi-generational family saga, with three tiers of relationships. The first story arc is about Rosemary, an Irish mail order bride who is coming to America to get married and make her fortune. She marries this landowner named Stephen and immediately falls in love with his land, even if her feelings don't extend to her brutal husband. That might still be fine - except it turns out that Stephen is a pedophile who is well known in both the Mexican and Navajo communities for taking and raping their children.

Rosemary is sickened when she finds out what her husband is up to and does her best to stop him...but this is the 19th century, so her best doesn't really amount to anything. So she tries not to think about it, mostly, and lusts after one of the Dine'e workers, Lario. Racial tension is at an all-time high, with many Native American tribes attacking the invaders who stole their land, so the affection they feel for one another is forbidden. But Lario saves her from a raid and they end up having sex and oh, whoops, she gets pregnant and ends up having a child by him, who she names Stephanie (because if she names her after Stephen there's no way he will suspect infidelity, is her logic).

Stephanie turns out to be a beautiful child, like a more "exotic" version of her mother (dark eyes and red hair). She has romantic problems of her own. There's the nice, childhood friend, Cody, who wants to marry her, who she just wants to f*ck. There's the emotionally unavailable man, Wayne, who she wants to marry. And then there's the evil Native American stereotype, Satana, whom she was promised to at birth by her greedy father and she fakes her own death to avoid. (Although quick question here: what is the point of erecting a tombstone with your name on it if you're just going to continue gallivanting about town without any sort of disguise? That is not smart.)

The final chapter is about Chase, who is Stephanie's son, and his inability to decide between two women: Deborah and Christina. This was my least favorite story arc, so I don't really remember much about these characters. I think Christina is the rich white daughter of a senator and Deborah is poor and mixed-race. The last part of the story takes place during WWII. Chase is one of the Navajo Code Talkers, and ends up being imprisoned by Japanese soldiers in the Philippines. Deborah is there too, and I can't remember why, but the two of them end up escaping with the help of a sympathetic local.

DUST DEVIL is depressing as all get out. The first two story arcs end in tragedy, with public castration, paralysis, child sexual abuse, suicide, and mutilation all occurring within the first 60% of the book. I'd read spoilers and so I had an idea of what was going to happen, but the sheer brutality of it still took me off guard. Keep in mind that I just read the first two books in A Song of Ice and Fire, too. This little bad-ass made those two look like swaggering bullies at a playground.

It's also politically incorrect as hell. There are race-based insults for everyone, whether you're Asian, Native American, or white. Since it fit the context of the story (this was a time when outsiders were regarded with suspicion and nationalism was at an all-time high), it didn't bother me too much, but there were times when I did side-eye the book. For example, near the end, the Filipino man who saves their asses is described as monkey-like or monkey-faced several times. Rude.

I thought the first two thirds of the book were pretty good. There are beautiful descriptions of here in the land, and how crucial it was to the western way of life. Plus, since the first part at least is set during the Civil War, you get a glimpse as to what that looked like on the West Coast. I also thought Rosemary and Lario's story line was great (albeit depressing) and more in line with what someone might expect from a traditional bodice ripper (barring the depressing ending). Chase's chapter kind of ruined it for me; it was a bad cap on an otherwise decent tale. Unfortunately it went on forever, or seemed to. I'm not sure how a code talker in a WWII prison camp could be made boring, but somehow it was, and I got really tired of him jerking Christina and Deborah along. He didn't make his decision until the very last chapter of his story and you want me to buy their chemistry? How about nope.

DUST DEVIL is not something I would suggest for those new to the bodice ripper genre, but for people who already like bodice rippers and are looking for something crazy to add to their collection, DUST DEVIL is a must. Even though I found it only "okay", it is fearlessly brutal, and I admired that about this book, because it really does show the horrors of war and prejudice and greed to their full, gory effect. Bonds also makes her "heroes" and "heroines" selfish little mortals who suffer at the hands of fate and try to be good people in spite of that but sometimes fail, and I admired that, too. Would I read another of her works? Girl, please. I'm already in the process of combing through her back list.