If Angels Burn by Lynn Viehl 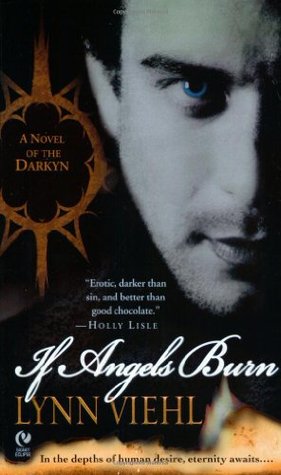 I was introduced to Ms. Viehl's work through her science fiction series, STARDOC, and the standalone, BLADE DANCER. She wrote strong, sassy women who were often involved in a medical profession (because, surprise, surprise, the author is a U.S.A.F. veteran who worked in civilian and military hospitals). When I found out that she wrote urban fantasy/paranormal romance under another name, that went onto my to-read list faster than you can say "boo!"

At first, IF ANGELS BURN followed a similar theme. The main character, Alexandra Keller, is a skilled plastic surgeon, said to have the fastest hand in the world. She's a woman of color, who was adopted - along with her brother - by a rich, privileged white woman, but Alexandra still remembers what it was like to be homeless and living in loveless foster homes, so she has two feet in both worlds.

One day she receives an offer of $4 million to perform a surgery on a man named M. Cyprien. The shadiness of the offer makes her think it's coming from an unsavory individual who's probably got his fingers into some very crime-filled pies, so she says no. Then she's hit on the head and kidnapped, and wakes up in a mansion. The man in the mansion is horribly disfigured, but his skin has the ability to regenerate. He claims that if Alexandra can cut him a new face fast enough, he will heal back to the way he used to be.

The reason he can heal so fast? He's a vampire. Spoiler! Except...you know, not really.

Here are some of the issues I had with this book:

1. The surgery descriptions and medical gore are detailed and gross. I cringed a lot while reading this book. The little old lady sitting next to me on the bus shot me some very curious looks because of all the squirming I was doing in my seat. I actually had to put the book away in my purse for a bit and regroup, which made me feel like a weenie.

2. The Knights Templar background was cheesy. There's another vampire series out there that includes a similar story line, called the Brotherhood of Blood. I didn't care much for it there, either. Why does everything have to be a conspiracy?

3. Priests are the bad guys who like to torture people. Natch, Alexandra's brother, John, gets mixed up with them. This actually could have been cool, having a brother and a sister become a vampire slayer and a vampire, respectively, if it weren't for the whole Brotherhood of Ick thing they had going on, what with their torture-happy ways.

4. Michael Cyprien is a jerk. He comes close (by my definition) to raping the heroine twice, and he's always tearing her clothes off and telling her to obey. The heroine's reactions to this are ambivalent and not very convincing. I mean, at one point she jokes about it, like, "do I get a say?" And then, by the end of the book, they love each other. Where was that emotional connection?

5. There's a character in here who likes to rape and torture people. Are they descriptive about this miserable joy of theirs? You bet your stars.

I give the author props for trying to come up with a somewhat original vampire story. I think it could have worked, but the measurements in here were off. There was too much violence and gore and not enough romance. If she was going for dark, it should have been written and marketed as straight horror, rather than attempting both categories but doing it by halves.

I don't think I'll continue with this series. What I really want to do is reread STARDOC.