Game Change: Obama and the Clintons, McCain and Palin, and the Race of a Lifetime by John Heilemann 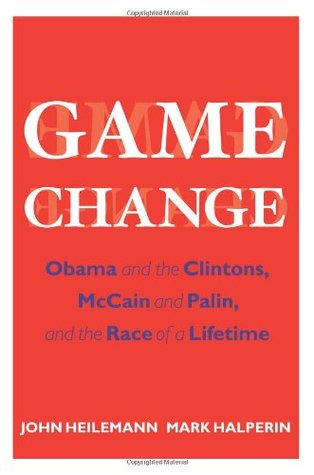 I don't generally make a habit of posting my political beliefs in public forums, but that is a difficult subject to escape when reviewing a book about politics. I mean, it's possible. I could write something dull and impartial like, "GAME CHANGE is a great look into the 2008 election. Eye-opening. I enjoyed it" - but let's be honest, okay? Where is the fun in that? Plus, as it turns out, I actually have some sincere thoughts on the subject. I know, what a surprise. A blogger having an opinion. Imagine that.

Since there's a fairly good chance Clinton might become president #45, I bought a few nonfiction books about her because I wanted to see what she's about. One is adoring, tinted by the rosy lenses of nostalgia - it's called REBELS IN WHITE GLOVES, and it's about Hillary Clinton, and the women in her graduating class at Wellesley, and how their ideals helped mold the world. This book, GAME CHANGE, is a bit more unforgiving. Everybody's friends in politics, except when there's an election. Then it's Mean Girls on steroids with million dollar smear campaigns - oh, and on Wednesdays, we wear flag pins.

The first two-thirds of this book are exclusively about Clinton and Obama, and their rivalry to secure the position of the democratic candidate. I remember these events pretty well, because this was the first election I ever voted in, so everything was new to me, and I was completely wide-eyed as I tried to take everything in. It was a pretty historic election period for the democrats, because no matter which way it went down, they were going to get a first - the first black president or the first female president. Regardless of who I voted for in that election, I'm surprised to say that I like Hillary Clinton a lot more this go-round. Like many others, her 2008 run left a bad taste in my mouth. She was ruthless back then, and not in a good way. Many of her tactics were low-blows, and she came across as unnecessarily militant with her policies for the Middle East. Some of that is explained in this book - she was put in a difficult decision, forced to stand by decisions she made when the war was still popular, and afraid to go back on her decision and being a flip-flopper like Kerry. Part of the reason for her tenacity is because of who she was running against. Obama was unflappable, calm, cool, and collected, and it's hard to run against someone like that as a woman and still get your two cents in - too quiet and they call you meek and subservient, too loud and they call you a nasty woman. You really can't win. She's mellowed out now, and she's not making the same mistakes that she made before, which is very reassuring. She seems prepared and doesn't allow herself to be baited.

Some people criticizing this book have pointed out that Hillary doesn't come out looking like a good person, shrieking and screaming when things don't go her way. But Obama doesn't escape criticism, either, which I appreciated because some of his missteps actually explained a lot of the antagonism in the race. He slighted John McCain, turning down a position he'd been offered in 2007, and Hillary Clinton essentially took him under her wing when he was still a young senator, so according to the book, she felt like he'd betrayed her, and cut ahead of her in the presidential line. One of the reasons the race might have felt so personal was because it was; both of his opponents may have had cause to feel betrayed by him. And don't even get me started on John Edwards and his wife, Elizabeth. I had no idea how messed up that situation was. A real sh*t show.

The Republicans and vice-presidential nominees don't make an appearance until the last third, where they're all lumped together with a quick conclusion and afterword. I actually felt a little sorry for Palin at the end of this - although the image of her surrounded by mountains of index cards as she studied policy with her increasingly frantic aides made me laugh a bit. It's interesting to think about how the election might have played out if McCain had ignored the advice of Rove and gone with one of his earlier choices of running mate, Joe Lieberman.The book ends on a happy note, with Clinton a little worse for wear but still as proud and indomitable as ever, being handed the olive branch in the form of Secretary of State by Barack Obama. A decent consolation prize, as far as things go.

I couldn't do politics. I hate superficiality, and in politics it's all about that glittery facade that posturing politicos put on for the public, when really, the two parties are made of mostly the same stuff with different labels. Or at least, that's how things used to be. There didn't use to be that much difference between the two parties, except for a few key issues. Now, it seems like a number of things are partisan issues that shouldn't be partisan issues, like consent and civil rights, for example, and that rallies of some parties (one in particular) are becoming overrun with people looking for a platform to spew hate. That's one of the things that has me so upset about this election.

It's something that I think many of us have reason to be upset about with this election.