The Hidden Blade by Sherry Thomas 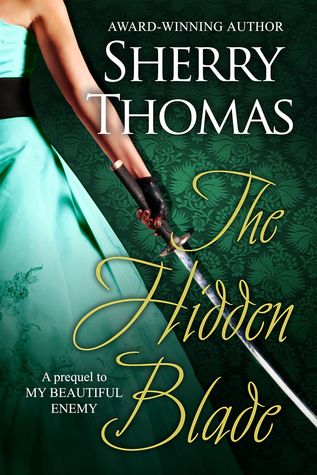 I'm supposed to be working on a major assignment right now that's due tomorrow and then going to bed, because I have to wake up at 3:00AM for an overnight shift at work, but I haven't done any of that because I've been too busy reading this book.

THE HIDDEN BLADE is a genre-defying novel, which is the only explanation I can comprehend for why this only has 600 ratings instead of 6,000. BLADE is being tagged as a romance, but the love in this book isn't romantic - it's so much deeper than that. It's also published by a publishing house that gears towards an adult audience, but the two main characters in this book are both teenagers throughout the full course of the novel.

If you think that either of those things means that this book is deceptive or boring, however, you have another think coming.

Ying-ying is the only daughter of a beautiful Chinese courtesan. She and her mother are kept by Fu-ren's consort, Da-ren. Ying-ying is raised by her Amah, and kept out of sight. One night, however, she finds her Amah coming back from a strange midnight excursion, all drenched in blood. Amah tells her that she is part of a secret society, and that she has been thinking of indoctrinating Ying-ying into it for years. On pain of death, she makes Ying-ying bow to her and swear fealty before beginning her martial arts/chi-based training in earnest.

Leighton, on the other hand, is the oldest son of a rather odd family. His father is gay, and occasionally his lover, Herb, whom Leighton gets along with well, comes to visit. Leighton's mother is complicit in this arrangement, with the understanding that she will be able to have her own lovers, as well. And she does - she has a man in San Francisco who is the father of Leighton's half-brother.

This arrangement is disrupted when his Uncle, Sir Curtis, comes into the picture and threatens to put Leighton's father into an asylum and his father's lover, Herb, in prison for homosexuality. His father commits suicide, and Sir Curtis takes great pleasure in blackmailing his mother and Herb to leave, thereby seizing full custody of Leighton and effectively making him prisoner in his own estate.

The story alternates between Ying-ying and Leighton's POVs, and both made my heart ache. Ying-ying struggles to deal with the problems her interracial heritage and strange beauty bring to her, the tragedy of slowly losing her mother to tuberculosis, and her increasingly difficult training. Leighton finds that caring about people can be a great weakness, as it gives others leverage to use over you. Knowing that his Uncle will hurt others if he tries to escape, he plots a very intelligent and elaborate plan to flee the country and meet up with Herb, who has fled to China to escape being jailed.

THE HIDDEN BLADE is a beautiful story. It's been a while since I read a tale that was so epic and broad in scope. The secondary characters were amazing - good or bad, they all made me feel something. The women were especially well done. All of them were strong and clever in their own way, and exhibited full autonomy. Lady Atwood, Amah, Ying-ying, and Fu-ren were my favorites. Don't let the lack of romance dissuade you from reading this book. It is exceptional. I'm already trying to figure out how I can get my hands on MY DEAREST ENEMY as quickly as possible.