Didn’t I Warn You? by Amber A. Bardan 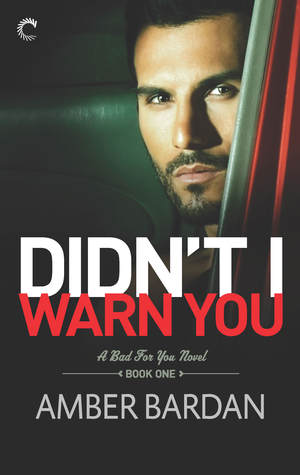 Carina Press is one of my favorite small publishers - I like a great deal of what they choose to publish, even if it's a book that isn't in my usual genre of choice. DIDN'T I WARN YOU sounded like it was trying to be a CAPTIVE IN THE DARK clone, but because of the hot man on the cover, and because it was published by Carina, I couldn't resist. Plus, that summary - it was so intriguing..

Now that I've read DIDN'T I WARN YOU, I'm not quite sure what to think. I liked parts of this book quite a bit - the sex scenes, for example, were very well done. Fairly steamed my glasses up, they did! I'm not sure I buy the romance as much, though, or the instant attraction between Angelina and Haithem.

This is being marketed as a dark book. The prologue led me to believe that this would be another book in a long line of mafiosi, drug cartel men, and soulless hitmen who get involved with an innocent girl and, through the miracle of Stockholm Syndrome, end up Romantically Involved. That was the book I was prepared for, so you can imagine my surprise when, even though Haithem keeps saying, "I'm dangerous, I'm dangerous, you can't handle me, stay away!" she pursues him with idiotic single-mindedness, contemplating sleeping with him the first time she lays eyes on him, and not blinking an eye when he traps them in an elevator for a FIFTY SHADES OF GREY-inspired make-out session. You can also imagine my surprise when it turns out that Haithem really isn't an evil man. He's not a good man, obviously - I mean, any time you kidnap someone, you can pretty much cross "nice guy" off your list - but he's no human trafficker, either.

I think the second half of this book is a lot better than the first half. I almost decided to not finish this book, because Angelina frustrated me so much. I wanted to shake her, and say, "Woman! Don't you have that voice inside your head that tells you when something is seriously wrong in a situation?" But then again, this is the girl who, when storming out after the hero offers to "buy" her, ends up tripping into a lifeboat and developing mild hypothermia. The second half was better, because that's when DIDN'T I WARN YOU takes on some elements of a thriller, you get more back story, and Angelina finally starts thinking about something other than what's inside the hero's pants (not much, by the way - he likes to go commando). It was also nice to see a heroine who takes the initiative with sex, even if it was done with an utter lack of self-preservation (and bonus points for using protection).

Would I read the sequel? I'm not sure. Like I said, I didn't really buy the connection between Haithem and Angelina. The sex was great, but I got my fill (ha - fill) in this book, and I'm not sure I'd pick up the next just to read a couple sex scenes (however well-written and titillating they might be). DIDN'T I seems to be a book for erotica fans, and for people who like reading "dark" books that don't actually feature rapist anti-heroes. This is like the PG-13 rated version of CAPTIVE IN THE DARK or TEARS OF TESS. I mean, he feeds her puddings & they talk about feelings, for God's sake! That's just a few steps removed from a Disney movie (minus the gratuitous sex, of course).

Email ThisBlogThis!Share to TwitterShare to FacebookShare to Pinterest
Labels: erotica, from netgalley, romance