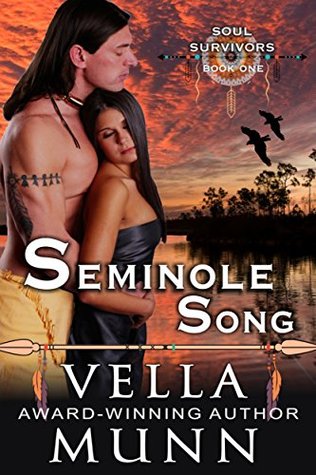 The prospect of a romance between a Seminole war chief and a half-black slave seemed like too good an opportunity to miss, despite that terrible, terrible cover. (Seriously, what is that girl wearing? And I'm pretty sure that those are belt-loops that I spy on the man's pants. Anachronistic, much?) But despite its solid start, SEMINOLE SONG really fell flat for me in the second half.

Calida is the slave of a man named Reddin Croon. Well, his wife's, actually, although that doesn't keep him from "borrowing" her. Reddin has a really creepy sexual obsession with Calida and whenever his wife goes out of town, he rapes her. The wife has been suspecting this was going on and one day she catches them in the act and threatens to tell her father (who owns the plantation). Reddin loses control & kills his life, and suggests that he might implicate Calida and cut out her tongue so she can't talk.

Calida flees and ends up in the Everglades with a man named Panther. Panther has encountered Reddin before, for various reasons. He's also familiar with slaves because a lot of the runaways seek asylum with the Seminole tribe. Panther's best friend is an escaped slave from Reddin's own plantation named Gaitor, and the Other Woman, Winter Rain, is half-Seminole, half-black.

Reddin realizes that the death of his wife is a major problem. His father in law, Isiah, comes down to micromanage things, and Reddin has to convince him that his daughter was killed by Seminoles (and he kills a few more slaves in order to keep them quiet). Reddin ends up waging a major war against the Seminoles, getting the military involved, all because he wants to punish the Seminoles for harboring Calida and get her back so he can have sex with her without the inconvenience of his wife.

I didn't really like the relationship between Panther and Calida. Panther was interesting but didn't have a lot of depth. He felt like a Marty-Stu character. Calida really annoyed me. Most of her dialogue was "No! No!" and crying. She was constantly running into danger, falling for just about every trap that came her way. This felt like an excuse to introduce Reddin Croon back into the narrative and show what a creepy pervert he was. She was also fetishized by Croon, who was super pleased that she has a "white lady's mouth" and described her as "high yellow." Ugh.

Three things I did like about this book:
1) The love interest was full Seminole. So many classic romance novels about Native Americans have the hero being "half-white." There is nothing wrong with this in principle, but it happens so frequently in romances that it does kind of feel like a cultural cop-out.

2) Winter Rain, the OW, isn't a bitch. She loves Panther and resents Calida, obviously, but she isn't catty about it. After reading THE FLAME AND THE FLOWER, which featured the Queen Mother of shrewish, antagonistic romantic rivals, I really appreciated that.

3) The heroine is hesitant about having sex with the hero despite being attracted to him because of the rape. He is very nice about it, and doesn't force her at all; he waits for her to come to him.

Despite those benefits, I didn't really like SEMINOLE SONG. The premise ran too thin too quickly, and I didn't identify with any of the characters. Reddin Croon is a rapist creep, I get it! Panther is a dreamboat, okay! Calida is really, really good-looking! Give me some dimension. Give me some depth.

I was looking at the premises for some of the author's other books, though, and some of them seem intriguing (there's one about the Donner party!), so I might give her books another shot at some point.

P.S. This book flings the N-word around like rice at a wedding, so if that is something that upsets or offends you, take heed.

P.P.S. While we're on the subject of Native American romances, does anyone know of any good Choctaw romances? I'm of Choctaw descent, so it would be cool to see a romance novel about that group. :)