The Captive by Victoria Holt 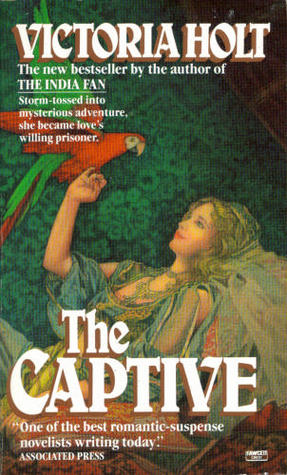 Jeez, that is some small font! I kind of want to channel my inner Derek Zoolander, and be all, "What is this? A font for ants?" The story was good, though. Even though Victoria Holt is mostly famous for her old-timey gothic novels, once in a while she'll attempt to write a bodice-ripper. While her last experiment was a bust for me, this one, despite the eclectic story line, was quite good.

Rosetta Cranleigh is the daughter of two Egyptologists, who named her after the Rosetta Stone. They're kind people, but wrapped up in their work, so Rosetta was brought up by the help and her governess, Felicity. Her parents don't really take an interest in her until she's a teenager, when they realize that she's a lot cleverer than they gave her credit for, and then they start bringing her to dinner parties and the like, where she meets love interest #1, Lucas Lorrimer.

The Cranleighs eventually end up going to Cape Town by boat, on business, and they invite Rosetta and Lucas to go with them - but they never reach their destination. The ship sinks in the middle of a storm, and Rosetta, separated from her parents, ends up on a lifeboat with Lucas and love interest #2, John Player, who reveals to Rosetta that he is actually the accused murderer that has England in an uproar: Simon Perrivale. A fact which, he tells her, she must under no circumstances reveal to anyone.

They touch upon a small island, and do their best to survive. It turns out Lucas has a broken leg & food is really low. It's a small island with no people on it, and water is running out. But then pirates come, and take them all hostage to sell them as slaves in Turkey. Rosetta is put in a seraglio for a pasha, and Simon and Lucas both become slaves. Rosetta is horrified to become part of a harem, and even more horrified to learn that Simon is most likely facing a fate as a eunuch. Honestly, this is probably my favorite part of the book because of how Holt wrote the harem politics. Sex, power, and attempted murder...it was all brilliantly done, and I would have been more than happy to read an entire book on this subject. I should point out that the back of the book is incredibly misleading, though, because it says "Rosetta is still bound by a consuming passion that will forever make her love's captive" and right before that it says, "Locked away in [the pasha's] harem, she will risk her life to save her virtue..." It made me think that the pasha would be one of the love interests, but he isn't. She never even sleeps with him, or even interacts with him at all. It was very disappointing.

The last 100 pages of this book are completely different, and take on the feel of a Nancy Drew mystery as Rosetta, back in England now, tries to find clues that will exonerate her friend, Simon, and allow him to return to England a free man. She achieves this by posing as a governess to Simon's step-niece, Kate. I was pouting a bit internally, because of how good the harem part of the book was, but I ended up getting quite engrossed in the mystery. This is where the gothic element comes in, and the book, as a wink to this, even casually throws in a reference to Jane Eyre (that fangirl shriek you heard off in the distance, that was me). I've read a number of Holt's books, and I think that in terms of actual suspense, this was one of the better plots. I didn't guess who did it until the end and I loved Rosetta's interactions with Kate, who was endearing and infuriating by turns.

THE CAPTIVE is a bizarre mishmash of 70s and 80s tropes, and features many controversial themes that must have been quite taboo in the day (abortion, castration, bigamy, harems, etc.). That is why, even though there is no sex, I think this could be classified as a bodice ripper, because it incorporates many of the themes that are so prevalent in that genre. It certainly was a much better experiment than THE DEMON LOVER.