The Stepford Wives by Ira Levin 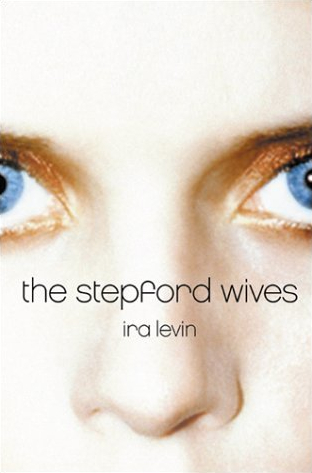 Is this a feminist book?

I just read this book called YOU PLAY THE GIRL, a book of essays about pop culture written through a feminist lens, and one of the essays was about Stepford Wives - I seem to recall the author juxtaposed it against the Desperate Housewives and writing a good deal about what it means to be a "housewife," whether you're a good one or a dysfunctional one. I really liked what the author had to say, and it actually motivated me to go dig out my old copy of STEPFORD WIVES for a belated reread.

Disclaimer: I'm a feminist, so obviously I'm a little biased, but in my opinion, STEPFORD WIVES is a feminist book in the same vein as THE HANDMAID'S TALES. STEPFORD is set in the middle of the civil rights era, where Betty Friedan is giving her talks and NOW chapters are rallying for equal rights for women. Men, for the first time, are suddenly expected to share in the housework, and women are being empowered to seek out their own jobs and goals independent of marriage and children, becoming sexually and fiscally autonomous.

One of the biggest issues that women continue to face is objectification. You see this a lot when sexist dudes talk about women, reducing them to their parts ("grab some p*ssy," "Tits or GTFO"), or talking about them as if they are trophies to be won for their accomplishments ("I'm such a nice guy, so why don't I have a girlfriend?"). It's gotten better, but not nearly as much as it should have, and one of the more chilling aspects for me is how modern STEPFORD WIVES feels, despite being published in 1972. I don't know about you, but it doesn't speak very highly towards our society that we're still being plagued by the same exact issues almost fifty years later. Especially since the chilling climax of this book is objectification in the ultimate sense: taking living, breathing women and replacing them with actual objects: in this case, robots.

I've read this book several times over the course of my life, and with every reread I take something new from the text. I feel like I was able to appreciate it more this time because I've been reading more books about history and feminism, so I have a better appreciation for the zeitgeist of the time of this book's publication, and what the broader historical context behind it was. In fact, I would say STEPFORD WIVES actually improves with subsequent reads, because there are all these sinister hints that you pick up on while reading between the lines that make it even more terrifying.

When Joanna first finds out about the Men's Association, she is against it. She expects her husband, who claims to be a feminist, will be, too, but he joins because "the only way to change it is from the inside" (6). The irony here is that the only changes being made on "the inside" are occurring within the context of her marriage: Walter sabotages Joanna so slowly that by the time she finally feels the noose tightening, it's already too late.

After one of his Men's Association meetings, Walter comes home late and masturbates furiously in their bed, but acts ashamed when she catches him: His eye-whites looked at her and turned instantly away; all of him turned from her, and the tenting of the blanket at his groin was gone as she saw it, replaced by the shape of his hip (15). They have sex at her insistence, which ends up being "one of their best times ever - for her, at least" and she says, "What did they do...show you dirty movies or something?" (16). This is one of those moments where, in subsequent rereads, the reader wonders: did the members of the Men's Association indoctrinate Walter by showing him what they do to their wives, and did the possibilities of that excite him instead of horrifying him?

Towards the end, after Bobbie, a friend to Walter and Joanna, "changes", Walter hesitates when it's time to say goodbye: Bobbie moved to Walter at the door and offered her cheek. He hesitated - Joanna wondered why - and pecked it (77). I took this to mean that Walter is thinking of his own wife's pending transformation and feeling guilt and uncertainty. Should he go through with it? When Joanna is worried about her friend, Walter has this to say: "There's nothing in the water, there's nothing in the air....They changed for exactly the reasons they told you: because they realized they'd been lazy and negligent. If Bobbie's taking an interest in her appearance, it's about time. It wouldn't hurt YOU to look in a mirror once in a while" (86). He goes on to say: "You're a very pretty woman and you don't do a damn thing with yourself any more unless there's a party or something" (86). That's when I felt like it became too late for Joanna. In the midst of her mental breakdown, she let herself - and the house - go, and Walter decided he didn't want to deal with that, any of it, anymore. Why settle for a flawed woman when you could have a perfect one?

When Joanna tries to run away from the women and the men from the Men's Association corner her, they hunt her down like an animal and mock her fear. I took this to mean that the objectification was complete: they no longer saw her as human - they knew she was about to become a robot, and so to them, she was just a thing. What makes this even more ironic is when they say, "[W]e don't want ROBOTS for wives. We want real women" (114). Because I've heard so many men say similar things - that they want smart, clever, beautiful women...but there's always a qualifier. As long as they don't try too hard, as long as they aren't more successful than me, as long as they aren't shrill or know-it-all.

The Men of Stepford want "real" women...but they also don't want flawed, forgetful women who sometimes let themselves go and don't want to do all the housework. They want the women of their fantasies made real: they want Pygmalion.

"Suppose one of these women you think is a robot - suppose she was to cut herself on the finger, and bleed. Would THAT convince you she was a real person? Or would you say we made robots with blood under the skin?" (114)

The ending of this book is depressing AF. I'm not sure what the message is, exactly, either - is it saying that men are inherently sexist and unwilling to move towards equality? Or is it a warning of the reductio ad absurdum variety of what objectification can lead to if left unchecked? And what of the children: are they going to groom their daughters to become robots when they come of age as well, marrying themselves off to the highest bidder? The story becomes even bleaker if you consider the possibilities. I took it as a warning, and a criticism of the patriarchy, but STEPFORD is open to so many possible interpretations, and I think that's what makes it such an interesting and lasting book.