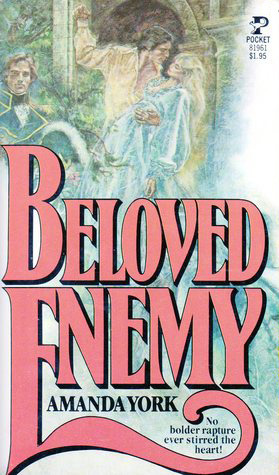 It's been a while since I read a good old-fashioned bodice ripper. There's nothing like them in today's market - and as liberal as I am, I find myself oddly fascinated by these un-PC, misogynistic train wrecks. BELOVED ENEMY is a fantastic OTT story of revenge. Stupid old Lanna is the "daughter" of this ruthless dude named Jared Malford. She's not actually his child, but he's raising her for reasons until she's 21. Lanna gets involved with this rakish guy named Rafe, but Rafe's best friend, Damon, has been wronged by Jared, so he sends Rafe out to see to be shanghaied and then rapes Lanna and keeps her prisoner on his boat to be married to him so he can take her money and then taunt her "father" about how he did his child wrong. To his surprise, Jared's all, LOL I don't care and P.S. GL with that.

Lanna and her traitorous body take up residence at Damon's plantation, where his half-black mistress named Indigo also lives. Indigo, by the way, is one of the best characters in this story because of her sheer determination and how she clawed herself out of every tragedy to rise up again and work whatever unpleasant situation she found herself in to her advantage by using her feminine wiles and cunning. She's like Scarlett O'Hara. Like, you can't believe her, but you also respect her, no matter how b*tchy she gets. I honestly felt pretty bad for her, to be honest. She was betrayed by her childhood friend (who was jelly that Indigo was prettier), and then this bitch (read: Lanna) comes along on her sweet gig and kicks up a fuss about her being there and Damon, the bastard, sends her off to this other plantation where she ends up getting raped every night by the master. Yeah, I'd hate Lanna too, after that. Who wouldn't?

Then things get even more awkward when Rafe comes back and Lanna is torn between lusting after her OTP and feeling loyal to Beth, the girl next door, who is Rafe's fiance and kind of reminds me of Melanie Hamilton from GONE WITH THE WIND, what with her whole pure and innocent and matyrish shtick. I did like Beth, but she wasn't really fleshed out at all because her entire purpose seemed to be as a foil to Lanna and her weird love-triangle-but-not-really between Rafe & Damon. Also like Melanie, she dies, and her death serves to make Lanna become a better person just as Melanie's death essentially served to make Scarlett realize how selfish/entitled she'd been all along. Except Lanna just crumples and becomes so traumatized that Damon gives in to what she wants because he feels so sorry for her, like she's just going to crumple to dust if he leaves her alone.

I think I would have liked Lanna more if she were like Scarlett - or even more like Indigo - and had all the agency and complexity of these other heroines. Instead, she had the spine of a wet rag and spent way too much time crying. Things get even crazier in the third act when Damon is captured by Jared and subjected to this intense and brutal whipping scene and then later on, severe burns after an attempt to blow up the ship goes horribly wrong. Lanna, thinking he's being imprisoned on this (Caribbean?) island instead of the brig, rushes out as soon as they dock to rescue him and ends up being tricked by this jailer who then subjects her to nightly rapes. I felt like Joan Dial/Amanda York was attempting to verbally duel with Rosemary Rogers to see who could torment their characters the most (Rogers is famous for brutal third acts with character tortures). She didn't win by any stretch (Rogers' heroines at least give as good as they get, and don't just crumple like teary rags), but it was an impressive effort nonetheless, and left me cringing.

There are actually LGBT characters in here, but the bisexual (and unfaithful) Llewellyn Davis is a cruel and manipulative traitor and his lover, Gideon, ends up committing suicide, which made me sad because I liked Gideon's character. Still, I felt like there inclusion was noteworthy, as BRs have a tendency to fetishize homoerotic scenes and make them characteristics of the bad guys. Llewellyn wasn't overtly evil, just corrupt and Gideon was never a bad guy, just a tragic one, and while it's unfortunate that the author succumbed to the bury your gays trope, I was surprised to see that her treatment of these characters was waaaaaay better than what you would expect to see from, say, Bertrice Small's work (where doing it up the butt pretty much brands you as the villain instantly).

Overall, I thought BELOVED ENEMY was really great and incredibly underrated. I bought it on impulse because it was available for Kindle for only $2.99 and I try to snap up as many of these rereleased bodice rippers as I can. The story is addictive and compelling, and until the last 50 pages or so, the pacing is pretty good. This would easily be a five star read except for a few niggling issues: The formatting is odd, with one chapter having random paragraph breaks for no reason, and there are a lot of typos scattered throughout. The author also foreshadows that one of the characters, Alain, and Indigo are Meant To Be, and hints throughout (I thought) that they would (or ought to) end up together, but at the end of the book Alain just sort of implies that he might end up with Indigo or someone like her and his storyline just petered out. Likewise, Rafe is written out of the storyline by the author just deciding to put him on an island filled with Polynesians when he decides to take one of the native girls as his lover. Indigo also just sort of disappears. I feel like the author had decided that she was going to be done by page X no matter what and just hastily tied up all these loose ends without really doing their respective storylines justice. Also, the war scenes at the end were boring because we've been waiting for Damon and Lanna to get over their big misunderstanding and when they finally do sit down and talk (even if it has to be at knife-point), she immediately splits them up again and let's be honest, those of us who stuck with this pile, we're reading it for Damon.

If you're a fan of bodice rippers, and in particular bodice rippers written by Rosemary Rogers, I think you will enjoy BELOVED ENEMY. It's not as un-PC as I feared, considering that it's about slavery, and while the hero is a rapist, cheating a-hole, he's not a completely cruel hero, either, and I found him more interesting than repulsive. There are just so many great characters in here and the scenery descriptions are all amazing. For $2.99, you'll be able to burn up a few hours in guilty pleasure while looking over your shoulder and hoping that no one you know sees what you're really reading. ;)