Lady Stuff: Secrets to Being a Woman by Loryn Brantz 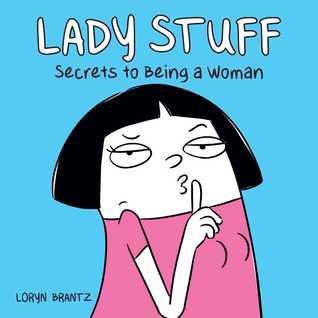 I'm reading some pretty heavy stuff right now - nonfiction about politics & a work of historical fiction about the Vietnam war. It's nice to break up the darker reads with a few light ones, so I decided to crack into my cookbook and comic book ARCs for some moments of respite.

LADY STUFF won me over with the title, because I'm a lady! I do stuff! Obviously, I should be able to relate to this book on a personal level because of that, right? RIGHT?

I've read a number of these girl-geared comic books of the twenty-first century at this point. The first and probably most well-known was probably HYPERBOLE AND A HALF by Allie Brosh, which remains my favorite (where's the sequel?). Then there's Sarah Anderson and her Scribbles and Ruby Elliot's IT'S ALL ABSOLUTELY FINE, which is a lot like HYPERBOLE except less insightful and a tad more cliche. If I had to rank them, I'd probably go 1. HYPERBOLE, 2. SCRIBBLES, 3. FINE, 4. LADY STUFF.

LADY STUFF is not a bad book, but like most of the book I mentioned, it tends to touch on the usual themes. "Oh, personal grooming is such a pain, right?" "Oh, staying in bed is so great, right?" "LOL, I'm so lazy. How lazy am I? Just look and see!" "I like cats! Liking cats is so on trend!" "I like dogs! Everyone likes dogs!" "I'm so introverted! I feel so awkward around people! I'm gonna go hide, k!"

I relate to all of those things hard (especially the introversion bit), so I get why these are such overarching themes in girl-geared comic books. A lot of people feel introverted and isolated so it's fun to poke some gentle fun at that while also embracing it and even celebrating one's introversion. But at the same time, there's only so many incarnations of the same comedic material that one can take. Her makeup panels were probably the most relatable to me because I am forever messing up cat-eyes and going back and trying to make things even and f*cking everything up instead.

Overall, this wasn't a bad book but it wasn't anything new either, and other artists have done it better and more to my taste. Still, if you enjoyed any of the other artists I mentioned, you should definitely check this one out, as you will probably enjoy LADY STUFF too, because #LadyStuff.