The Countess by Catherine Coulter 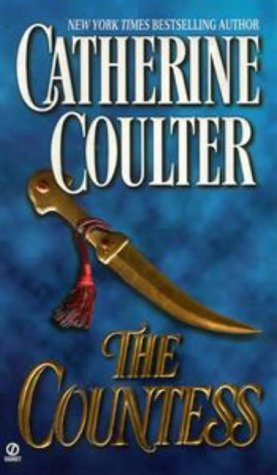 The only Catherine Coulter books I've read prior to THE COUNTESS were two of her bodice rippers. One of them was okay (it was the "extensively rewritten" edition of one of her bodice ripper classics). The other was annoying and I hated it. This, averaged out, did not seem particularly reassuring and I told myself that if I picked up THE COUNTESS and hated it that I would simply chuck all of her books into the donation bin unread. To my surprise, however, I actually enjoyed THE COUNTESS quite a bit!

Andrea "Andy" Jameson is a headstrong heiress who has been indulged by her grandfather and has serious issues with her actual father. She falls for a young man named John who seems to like her dog almost as much as he likes her, but finds herself afraid of him (for reasons that will be explained later). She ends up marrying herself off to a much safer option - an older man who promises that he won't touch her. Unfortunately, this older man is the uncle to John. Oops.

Awkwardness abounds as Andy lives in the same house as both John and Lawrence (the uncle) as well as John's brother, Thomas, his wife Amelia, and the daughter of Lawrence's previous wife, who allegedly committed suicide by jumping out from one of the windows of the rooms adjoining Andy's. The relationships between these various family members are complex and fraught with rivalries. Plus, there's a creepy mystery surrounding Lawrence's previous wife's death. Especially since several attempts are made on Andy's own life in increasingly bolder attempts.

Andy is a great heroine. She's headstrong and brave without being an idiot (the previous heroines written by this author were both idiots). I see that this book was also published as THE AUTUMN COUNTESS and, like the bodice ripper I read, is also "extensively rewritten." I'm not sure what the author changed, but it actually works here. The plot is spooky, the heroine is brave, the hero is dashing and manly, and the supporting characters are all interesting and serve as more than just hapless plot points to pepper the story with mystery and red herrings.

Also, the villain is creepy AF:

"I have decided to take you, Andrea, as a man takes a woman. You are a virgin. I have not enjoyed a virgin in a great number of years. It will be exciting. I won't mind you fighting me, but not all that much. Just a bit to give excitement to the taming. Since you (spoiler), you must obey me. Ah, to have your virgin's blood on me, to feel my seed deep inside you. I will enjoy that. I will be the only man ever to have you" (319).

P.S. Since I noticed nobody else has posted it yet, here's the stepback to the 1999 edition: