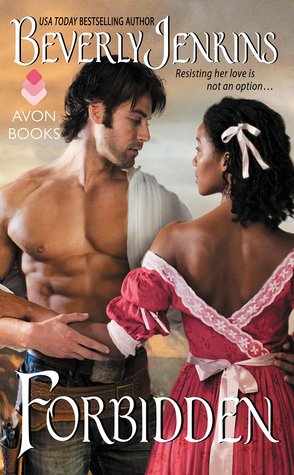 As a nod to black history month, my romance group decided it would be fun to read a historical romance novel featuring two characters of black ancestry. We chose this book. I was really excited about this pick, because I've quickly grown to love Beverly Jenkins's work. Her writing style is reminiscent of Lisa Kleypas and Courtney Milan. Her headstrong heroines and swoony males, remind me of Kleypas, as well as how much attention she pays to the side characters, even having them walk in and out of later books. She reminds me of Courtney Milan in how she focuses her efforts on empowered women and people of color, which is so important because of how those narratives are often pushed aside.

FORBIDDEN is about a black woman named Eddy Carmichael. Both her parents are dead and she's estranged from her prostitute sister. After being robbed, she decides to head out to San Francisco while depending on the kindness of strangers to get there because her sister won't give her a dime. Of course, she gets robbed again, and then left for dead in the middle of the desert by a con artist just as soon as he discovers she won't trade him her body.

Rhine Fontaine, the hero, is the one who finds her and helps nurse her back to health. Rhine, the dreamboat on the cover, is a wealthy business owner and an active player in Nevada's Republican political scene. He's also the son of a slave, and has been "passing" for White for all these years because of the many opportunities it offers him that he wouldn't have access to otherwise. Rhine never questioned that decision until he meets Eddy and finds her much more appealing than his fiancee, a white society woman who is absolutely determined to wrap him around her finger.

I was actually picturing the hero and heroine in my head as Tiana and Naveen from The Princess and the Frog. Eddy is an excellent cook (oh my God, the food descriptions in this book) and wants to one day have her own business or at the very least be totally self-reliant. Rhine, on the other hand, is a smooth-talking ladies' man who knows he is good looking and entirely too used to getting his way because of it. I wasn't completely sold on the romance between them at first because when Rhine meets Eddy, he's already engaged to another woman and makes advances towards her anyway. She turns him down and in the end, he decides to break things off with Natalie, his fiance, not just to be with Eddy (although mostly) but also because he realizes that she isn't a nice person.

Funny, how it often takes another woman to make dudes realize that in fiction...

I've only read two books by Jenkins, the other was DESTINY'S EMBRACE, but I'm already noticing some common themes. Jenkins seems to favor the "virgin and the rake" trope: both heroes in these books were man-whores, and both heroines were virgins. The heroine is both these books is so beautiful that she literally (especially in the case of DESTINY'S) has to fight off a line of suitors. Jenkins is also a fan of history, so a significant portion of the book usually focuses on some aspect of that - well outside the degree necessary for simply setting the scene. DESTINY'S EMBRACE talks a lot about the history of California, especially in Yolo County. FORBIDDEN discusses Republican and Democratic politics in the U.S. before they switched platforms, as well as racism.

I'll admit that the ending made me raise my eyebrows a bit because it felt so dramatic. But given what I knew about Natalie's pride and her desire for others to see her as superior, I guess it felt like what happened could have happened. Maybe. I also felt like Rhine's "big reveal" was rather anticlimactic. A lot of people owed him money and probably resented his power. Given what I know about bigotry and cognitive dissonance, I'm sure that far more people would have been quick to attempt petty revenge once he told everyone the truth about his heritage. That said, it sure was satisfying to see Rhine anticipate their every move and put them all in their place. Take that, bigots!

FORBIDDEN was a quick, fun read. It had some problems, sure, but I loved the characters and it has some pretty steamy scenes between the hero and the heroine that were much better written than the ones in DESTINY'S EMBRACE. Plus, I haven't been feeling well lately so it was nice to read something light. The research Jenkins did for this book was obvious, as was the care she put into developing the secondary characters and making them all feel three-dimensional. Reading this reminded me that I still have THROUGH THE STORM to read, which is about Rhine's younger sister, Sable. Maybe I'll pick that one up next. There may be a Rhine cameo in it for me. ;)