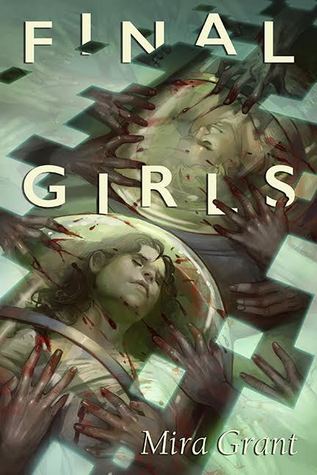 I haven't read a lot of Mira Grant's work, but what I have read, I've really liked. Grant writes good, compelling female heroines, and fuses science fiction and horror with an ease that I haven't really seen anyone master since Michael Crichton - and FINAL GIRLS is something out of a Michael Crichton nightmare.

Dr. Jennifer Webb is the inventor of some controversial technology that "treats" clients by having them undergo and resolve psychic conflict in the form of fully immersive virtual reality horror scenarios paired with psychotropic drugs, all to manipulate the emotional centers of the brain. Esther Hoffman is a pop science reporter for a magazine called Science Digest. She's been sent to the VR clinic by her boss to experience the scenario firsthand and see if the claims of its healing magic have any merit. She's understandably skeptical, because she's been burned by regression therapy before.

Esther agrees to go through the scenario, along with another patient - for SCIENCE - and immediately it's clear that...things are not right. Because when have things ever gone right in books or movies when done for SCIENCE? Science is always the villain in fiction.

FINAL GIRLS explores the relationship between mind and body in a way that's straight out of The Matrix: that fear response is an electrochemical reaction to outside stimuli. It actually struck me as really interesting, because the "conditioning" done here kind of reminded me of the "conditioning" that's done in CLOCKWORK ORANGE. Both use traumatic events to manipulate emotional response and cognitive associations in order to change behavior. I was actually discussing this in a book club, recently, because my point was that superficial conditioning like this doesn't really work that well because of all the layers of thought processing that exist in the brain: behavior and emotional response are easier to change than core concepts making up identity and personality.I felt like we see that with Esther, who, at one point, understands that her altered reality isn't quite right, even though she gives into it (partially because of the drugs, because, you know, drugs).

I'm not 100% sure I buy this concept. I studied psychology in school, and the premise of this "therapy" felt a lot like that "day-care sex-abuse hysteria" phenomenon that happened in the 80s and 90s, when repressed memories entered the mainstream vocabulary and suddenly everyone was claiming that their schools participated in Satan-worshiping and orgies. Webb's "therapy" felt like it was more about brain-washing and creating false memories than it was about repairing old ones. I wondered if perhaps that was the point. Grant drops several hints that suggest this book could go either way, which is brilliant, if that was truly her intention. I love it when things go all meta on me.

FINAL GIRLS is a horror novel for the 21st century that will have you thinking twice the next time you say to yourself, "I wish my video games were real." Still not convinced it's such a bad idea? I have two words for you, my friend: Silent Hill. Convincingly creepy as it was, I do wish FINAL GIRLS was longer. Reading it was like reading one of those Tor.com shorts. Interesting and frustrating all at once. There was an interesting concept here, and I would have liked to see it explored at length instead of being presented in this abbreviated form.