Banner of the Damned by Sherwood Smith 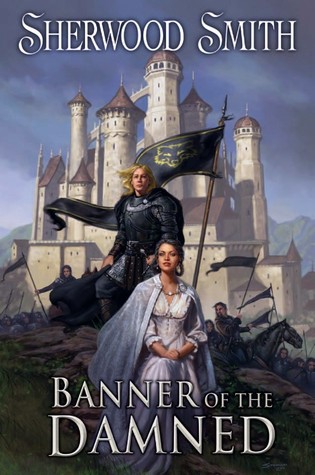 I'm really annoyed at this book. Not because it was terrible, or even because it was bad - no, I'm angry because it could have been AMAZING and instead it was merely okay. Part of that lies with the incredibly misleading summary, which would have you believe that this is a fantasy romance story, possibly with elements of F/F. Instead, what romance there is in here is severely underplayed, with the focus being on politics and court intrigue. Don't get me wrong; I love court intrigue, I thrive on court intrigue, but that summary set me up for something else entirely.

Our narrator, Emras, is only mentioned once in the summary on Goodreads, which would have you think that she's a secondary character and not, you know, the voice driving the narrative. And what an utterly dull voice it is...honestly, it's to this story's credit that BANNER OF THE DAMNED could be as engaging as it was with dull-as-dishwater Emras telling the story.

Emras is a scribe. She's arrogant, sanctimonious, and hypocritical. These things sort of end up almost being her downfall by the end of the book, which actually says some pretty cool things about how power corrupts even when you attempt to use it for good, although it doesn't really come to bite her in the butt as much as it should. After going to scribe school, she's appointed to Princess Lasva to be her royal scribe. Lasva is a Colendi princess. Colend is a fantasy land that borrows heavily from both Japanese and French culture. This shouldn't work, but it does, and what follows is an amazingly detailed description of all the little cuts and secret languages they use to communicate in the very height of courtly fashion. I'm sure this will bore some people to tears, but I found it fascinating.

Lasva is in love with a man named Kaidas...I think he's the son of a baron. Lesser nobility, in any case. They carry on a romance that titillates the court with how secretive it is, and fills the duchess, Carola, with burning, vindictive envy. When Lasva is forced to end her relationship with Kaidas and marry a foreign prince by her Queen sister, you can bet that Carola swoops in to steal her man only to realize that being married doesn't necessitate love. Lasva finds this out too with her husband-to-be, Ivandred. His court, Marloven Hesea, is as sparse and crude as Colend is opulent and courtly. In a territory of unrest, he and his people thrive on strength and honor and war, and even have a secret school that's entirely devoted to making boys into young men, and young men into soldiers.

Lasva, Kaidas, Carola, and Ivandred were my favorite characters. I rooted for Lasva and Kaidas to be together, and my heart broke for them when they were forced to marry elsewhere for political reasons. It took me a while to get over it, and while I never rooted for Kaidas and Carola, I gradually began to ship Ivandred and Lasva. I'm such a sucker for strong men with fragile hearts, and Ivandred has such a tragic backstory. Also, am I the only one who desperately wants an M/M prequel about Invandred and Dandrid's relationship with they were young men? Yes? Yes? I thought not.

While in Marloven, Lasva quickly realizes that the land that's become her new home is fraught with terrible danger. War, fracturing alliances, and dark, dark magic. She also realizes that the men around her are too proud to lose face and sacrifice honor, so she embarks upon a brilliant campaign of sowing fragile seeds of peace through the women with Emras at her side, hoping all the while that her husband and his enemies won't trample them to oblivion or be found out by magical spies.

In one of my status updates, I said that this is pretty much Game of Thrones for women and I stand by that. This world is a world that has evolved beyond rape. War is fought fiercely and brutally but without gratuitous torture and sexual and physical violence. The world is just as developed and the characters are just as flawed and complex, but they're a lot more likable and human-like, even the bad ones. Let's be honest, a lot of the "people" in the Game of Throne series are just monsters in human skin. BANNER OF THE DAMNED has politics, intrigue, war, magic, love, and romance, but it manages to balance all these things and show how the characters change and develop because of these various things, for better or for worse. Also, it does something that Game of Thrones doesn't: it touches upon the many different kinds of love and sexualities. For example, in Marloven Hesea, they have a history of gender fluidity and it shows in the flexibility of the pronouns in their ballads. Colend has several different names for "love" depending on who you're attracted to (those who like men, those who like women, those who like both), or not. Emras, the narrator, is asexual, and the author is careful to point out that while Emars can still feel love and affection - and does - it is only the physical expression, in the sexual sense, that puts her off, although she can still enjoy touch.

The problem is, as I said, that Emras just isn't a very interesting character. I was fascinated with all the side characters orbiting around her like satellites and couldn't figure out how she could be so dull. Even when she's learning magic spells, I could scarcely be bothered to care. She just didn't seem to have much personality and I couldn't quite figure out if that's because her will had been utterly bent towards adhering to the rules of being a scribe (although Birdy and Tiflis went to the same school and had the same training, and they didn't have this boredom issue), or if it's just that the author is stronger at writing in the third person than the first person, and therefore comes across as impersonal as habit because when writing third person you have to be removed to let the characters tell their stories. Regardless of the reason, Emras was this wonderful story's downfall, and I'm pissed at her for it, because the writing and world-building and characterization (of anyone but Emras) are utterly brilliant.

Also, Ivandred: you poor, sad Marloven cinnamon roll. You didn't deserve what happened to you. :(