The Widow's Auction by Sabrina Jeffries 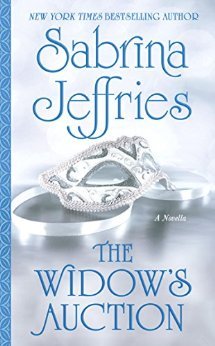 This isn't my first Sabrina Jeffries rodeo. That honor belongs to STORMSWEPT, a rerelease penned under her Deborah Martin name. When I was given an advance copy of this to review on Netgalley, I looked forward to the chance of seeing how her style had evolved. STORMSWEPT was written in the 90s, and while the heroine was likable, none of the male leads were at all. I'd hoped THE WIDOW'S AUCTION would be different, but as with the first one I found myself saying, "I liked parts of this book, but..."

THE WIDOW'S AUCTION is about a widow - surprise - named Isobel Lamberton. She's leader of a board of directors, basically, who all make decisions about what happens to her late husband's school. She and this man, Justin Antony, find themselves viciously at odds, so obviously she loathes him.

At the same time, Isobel's friend persuades her that she ought to join a WIDOW'S AUCTION because she "just needs to get laid." Or whatever the 19th century equivalent of that phrase is. So Isobel goes to a fancy gentlemen's club, with a mask and revealing gown, and has men bid on who will get to spend the night with her.

I will give you three guesses to figure out who wins.

THE WIDOW'S AUCTION does have some things in its favor. The heroine points out the irony of men being able to sleep with whomever they like, whereas women's value is only in their innocence. Her backstory was interesting, as well - I liked the Pygmalion reference. I'm a sucker for that (Audrey Hepburn), although I thought that particular trope might have benefited a longer book more (so you could see the transformation from start to end in an epic fashion).

What really kills this book is the length. It spends so much time on the sex that, given the length, it feels like one of those erotic shorts. Except there isn't really enough sex in it to classify for erotica in my opinion, so what you end up with is this bizarrely short story that changes track multiple times, far too quickly that any of the storylines inside were resolved to any satisfaction. I mean, am I to believe that all their disputes and conflicting ideals totally flew out the window after sex? I certainly don't buy that the two of them fell in love after a single night. That's just ridiculous, given their history.

I was not a fan of WIDOW'S AUCTION. I'm not writing this author off, but I think I'll stick with her novels over her novellas. The pacing's just better, there.