Lord of Ice by Gaelen Foley 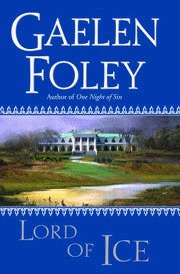 I've read a lot of regency romances, and I'm always excited to find something that isn't directly cast from the Pride and Prejudice mold and LORD OF ICE is that. A guardian/ward romance at heart, it also features several other tropes that I enjoy, and does them well enough that I didn't find them *too* cliche.

Miranda FitzHubert is the bastard daughter of a nobleman who perished in an accident with his actress mistress. After their untimely deaths, she was given to a guardian, a battle-scarred war hero who drank to forget the horrors of what he'd done. When he's murdered (God, this girl is playing a hideous game of musical guardians), she's given to yet another keeper, another veteran, Damien Knight, the PTSD-ridden Earl of Winterley.

His name is appropriate, because he really is as cold as ice. Damien pushes everyone - especially Miranda - away, because he's afraid of what will happen when anyone gets too close to him, especially at night. Miranda's ex-guardian, Jason, was a close friend of his, and after fighting in war, and getting a taste for it, he's repelled by death, and also by himself for causing so much of it, and not feeling as guilty about killing as he should. His night terrors add a further block between him and Miranda, because he lashes out in his sleep.

Plus, she's his ward and that goes against his sense of honor, of course. Which is horribly ironic, because he meets her when she's performing on stage (she runs away from her school in the evening to pursue her dreams of acting), assumes she's game for a quick fling, and comes perilously close to forcing himself on her. This was not the best introduction for the hero and made me dislike him a lot. I liked him more later, after his character was developed more and he repented his actions, but his treatment of women he considered inferior left a lot to be desired. He doesn't cheat, though, although at one point he considers it...but thankfully, he reconsiders at the last minute (sigh).

There were many great scenes in here. The opening of this book was five-star-worthy. So was Miranda's stint in her Dickensian boarding school with the sinister Mr. Reed. There were deadly chases, near escapes, acts of seduction and treachery, and pretty much anything else you could ask for in a regency era soap like this. If I had any complaints, it's that the side characters weren't really explored to their full potential, and were more like wallpaper or backdrops than actual people, just popping in occasionally to drive the plot or keep the scene moving, rather than displaying any agency.

The villain was decent, and appropriately sneaky and horrible, but I felt like he could have been fleshed out more, too - especially towards the end, when we learn something about him that simultaneously seems more sinister...and yet also comes from way out of left field. It's not really a spoiler to say this, since we're introduced to the villain in chapter one, but because we're given the name of our antagonist so early on I felt the author should have worked harder to make us fear him.

Finally, at the end of the book, right where I expected things to wrap up, the author throws in a last-minute conflict - the Napoleonic Wars - and has the characters have a big fight over it right after they're married. This felt like an unnecessary attempt to bulk up the page count, and annoyed me. Had it gone on for any longer than it did, I would have deducted a star rating because it was totally pointless. The situation is eventually resolved and a happily ever is tacked on, but it left a bitter taint to the story it wouldn't otherwise have had, because it makes Miranda look like a bitch and undermines her vows to support him and give him everything he needs for closure.

These are little nitpicky details, though - the irony is that when everything else in a story is good, you can afford to look a little deeper and discuss the things that would make it a perfect (or close to perfect) read, rather than just a tolerable one (as in the case with bad books). LORD OF ICE is very well written, has a rather strong and enterprising female protagonist, and a pretty icy hero who despite his gruff and tortured exterior, desperately wants to be redeemed. In spite of my reservations, I enjoyed LORD OF ICE quite a bit and would definitely read another book by Gaelen Foley.