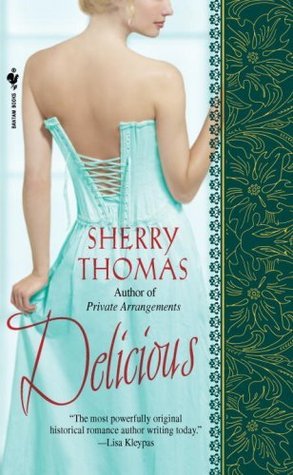 I am honestly surprised by how few of my friends enjoyed this book, because I thought it was exemplary. Like CHOCOLAT and WATER FOR CHOCOLATE, in DELICIOUS, Thomas captures the sensuality and headiness of food, tying it into both sex and love. Verity, the cook heroine, is such an amazing conjurer of food that her culinary creations have people remembering both their worst and fondest memories with a deepness that often shocks their Victorian sensibilities into speechlessness. She has several secrets though, which seem to have doomed her from finding love.

Except, since this is a romance novel, you know that's totally not true!

I should note that Sherry Thomas is not a new author to me. I've read THE HIDDEN BLADE, which is an even better book than this. (Seriously, read it - I cannot recommend it enough.) When I read a book I really enjoy I'm sometimes reluctant to pursue a second book by that author, out of fear that it will be a let-down. I needn't have worried. The things that appealed to me in HIDDEN were present in DELICIOUS, too: beautiful writing, strong heroines, good characterization, interesting twists...they were all here, much to my delight!

DELICIOUS is also a retelling of the Cinderella fairytale, although this is one of the book's weaker points. This relationship was pushed a bit too hard, and I thought the little quirks of fate that kept Stuart from seeing Verity's face were too convenient. I was more interested in how pride kept the characters from being happy - either because it caused them to chase a dream beyond their reach, hurt the people they loved because of their prejudice, or become utterly enslaved by convention. There are elements of PERSUASION in here, as well, which I think a lot of people will really like.

There's also a secondary romance, but I actually liked it. Normally, secondary romances feel like filler to me, but this one worked. In some ways, they had better chemistry than the main couple. The only thing that was frustrating was that I had hoped that the secondary hero was bisexual. I was so excited, because the only ones I've encountered in mainstream historical fiction (as a love interest) were Courtney Milan's HER EVERY WISH and Elizabeth Hoyt's DUKE OF SIN.

DELICIOUS is a really great historical romance that takes tropes from Cinderella and PERSUASION and blends them with excellent characters and a fairly engaging plot. I'd recommend this to fans of Victorian romance and especially to fans of Sherry Thomas.