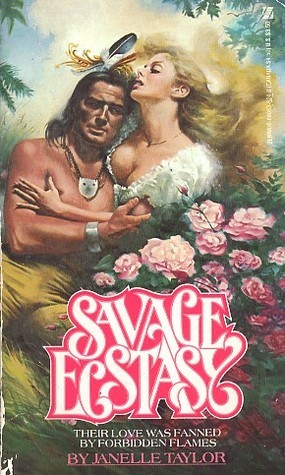 We buddy read SAVAGE ECSTASY as our first bodice ripper theme read in the Unapologetic Romance Readers group. I've read a number of bodice rippers over the last couple years, and SAVAGE ECSTASY has been near the top of my list for years because it's supposed to be the OG of Native American romances.

SAVAGE ECSTASY opens with a series of very long info dumps introducing us to the tedious bore that is Alisha. She lives at a fort that has captured a Native American. He's been tortured by three men who live at the fort, one of whom has the hots for Alisha. They're enraged when Alisha attempts to intervene, threatening them with a gun to make them leave him alone. But all is for nought, as the men make sinister plans to torture the poor Native American dude even more, and the guy who's Team Alisha makes even more sinister plans to compromise Alisha later so she'll marry him.

Then Gray Eagle has his men raid the fort. Everyone is butchered except for Alisha, a couple women, and the three men who abused Gray Eagle. They're brought to the Oglala/Sioux tribe, and either imprisoned to await torture or turned into sex slaves.

I should note here that it's very, very important to remember how beautiful and innocent Alisha is. It's only mentioned about 1,000,000 times. Every single man in this book wants to have sex with her. About four of them try to rape her at one time or another. Oh, and there are no nice women in this book, apart from St. Alisha. All of them are jealous of Alisha, and attempt to use their womanly wiles to seduce other men into getting their way to seeing her ruined. I can only assume that the endless descriptions of innocence and purity are meant to distinguish Alisha from the Other Women, who, unlike Alisha, don't seem to feel any embarrassment about their bodies.

SAVAGE ECSTASY is pretty typical for an early 80s bodice ripper. There's rape, and the hero, Gray Eagle, tries to pin the rape on the heroine, arguing to himself that the heroine forced him to it by not being willing in the first place. There's also some truly gruesome torture scenes that take place at the camp that surprised me, because it's usually the books published in the 70s that have the torture scenes. By the time the 80s rolled around, that started to get phased out of the books.

The writing isn't very good, sadly. I get that this is a debut effort, but it really shows. The pacing is uneven and exposition is delivered in huge infodumps that tend to go on for pages. Point of view changes randomly and without warning, and whenever a character is expressing their thoughts, the writing switches from third person to first person, which can be distracting. I also noticed that there are a lot of typos in this copy (I have the Kindle edition). Some of them almost looked like conversion errors (random special characters inserted where punctuation should be), but there were some typos and misspelled words, too, which was odd. Did an editor look at this edition?

One thing in this book's favor is that the story is relatively engaging. Despite its flaws, I couldn't put the book down and found myself with a perverse desire to endure and find out what happened next.

Edited 8/22 because I was a dumbass and got the hero's name wrong. #Fail