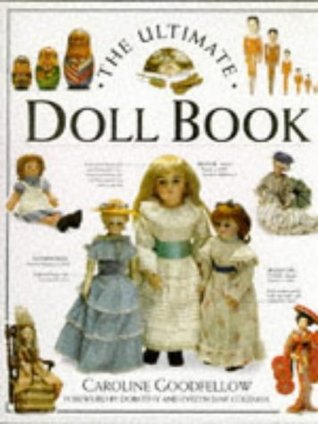 I bought this at a boot sale in the UK a number of years ago. If you don't know what a boot sale is, that's where a bunch of people park their cars in a lot somewhere and then put a bunch of things they want to sell in their "boot" (or, trunk if you live in the US). It's a lot like a garage sale, but has the advantage of both being a fun social event for the community and not showing a bunch of total randos where you live.

The illustrations in this book are really great - all of the photographs are of high resolution and clearly show the fine details of the dolls, like the painted glass eyes or handmade accessories like manicure sets. The author covers a pretty broad timeline, too, with dolls from the 1700s to what was the present day when this book was published (early 1990s).

Even if I don't collect/am not interested in the things being showcased in these types of books, I still love them, because they're often published by collectors and you can see their passion for their hobbies radiate through the pages. Such is the case, here. It's nice to live vicariously through a doll collector who clearly finds these monstrosities charming because let me tell you right now: ain't nobody putting a bunch of creepy-ass plastic people* in my house. I've seen too many movies. I know how that shit goes down.

I'm NOT going to be murdered by dolls, thank you very much.

*Actually a lot of dolls weren't made out of plastic, but things like bisque, composite, or wax. And if the dolls aren't actively trying to sneak into your bedroom with a knife, they're unarguably trying to kill you another way: with the white lead that was mixed in with the wax to pigment it to approximate flesh tones. Lead used to be put into everything. Women's foundation contained lead in the 19th century; it was called "enamel" and I believed mixed with wax so that it would "melt" on the face.

This book does feel dated, though, because of several noted omissions that would probably be included in a similar book published today: Bratz dolls, Baby Alive, American Girl dolls, and the Monster High and Equestria Girls dolls. Also, when it comes to the matter of addressing dolls representing people of other ethnicities, it sometimes feels... awkward? The Asian dolls are often referred to as "oriental" dolls, for example, and while the descriptive passages note that many "black" dolls were made using the same molds as "white" dolls and just painted differently, they fail to note that "painted differently" in these instances tends to look an awful lot like "blackface." A similar uncomfortable moment arises when a WWII-era doll from Germany is very, very simply described as depicting "German ideals" (or something like that) with its blonde hair and blue eyes.

This is an interesting book if you can find a copy. I wouldn't say it's worth seeking out unless you're a serious collector, but it's fun for passing the time and learning a bit about the history behind one of the world's most widespread and popular toys.