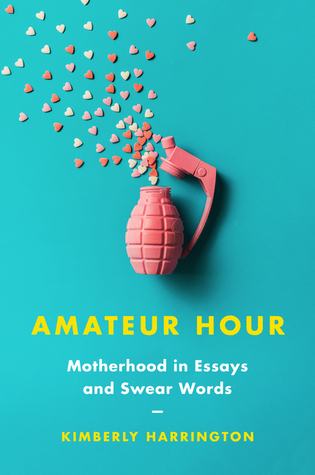 Full disclosure, I received an advanced reader's copy of this from the Goodreads Giveaways - my first win in years! - so I'm really excited about that. Hard copy ARCs are so fun.

This ended up becoming a #StealthRead because I have the flu, and my eyes were hurting so much I couldn't look at a computer screen, so I took a nap and then I read physical copies in bed instead of ebooks (which is how you know I'm feeling truly wretched, because I read mostly ebooks at home). I also wanted to read this book for International Women's Day, because I think moms are so important, and do not get the respect they deserve.

I'm not a mom, but I'm at the age when a lot of my friends are starting to become moms. I recently went to my first baby shower, and nothing says "congratulations! you're officially an adult!" like going to a baby shower (except maybe a wedding, or a 4th of July Barbecue where you're actually expected to bring something). I have so much respect for people who want to become parents, and especially women who want to become moms, because it really is a sacrifice - a physical, financial, emotional sacrifice; nothing is more selfless than raising this small person, nuturing them, and then launching them into the world.

I recently read this great book called TOO FAT, TOO SLUTTY, TOO LOUD, which was basically a series of essays about the unfair double-standards society places on women, using celebrities as examples. One that really stayed with me was the one about Kim Kardashian, and how pregnancy for her was such a miserable, awful experience, and she was totally lambasted about it in the media, who seemed to be doing their best to take unflattering photos of her and make her seem like an unfit parent. I don't know Kim, but I do think that a lot of those stereotypes about motherhood have permeated the lens through which society views mothers, and how they believe mother's should act.

One thing I liked about AMATEUR HOUR is that it's not one of those transcendent memoirs that makes motherhood seem like this Pinterest-perfect thing that happens to you, that transforms you from an ordinary person to Hestia, goddess of domesticity. Instead, it's a pretty straightforward memoir of someone who happened to become a mother and loves her kids, even if she secretly- or not-so-secretly- has second thoughts about it sometimes. There are a lot of great topics in here, like miscarriage, abortion, gender roles, unfair expectations, child-rearing, bereavement, birth, and even growing up and growing old, and the very fine line that separates the two.

The only part where she lost me was when she went on a tirade about "participation trophies." It had an unpleasant whiff of the "entitled millennials" tirade that's so popular right now. There's a fine line between rewarding kids for mediocre or even poor work and what she was upset about, which was the fact that her school had changed the play of the Lion King to add more roles so that all of the kids would have equal parts. My school did that, and let me tell you that as a shy kid, I was often shunted to the side by louder, more aggressive kids who wanted that spotlight and didn't need to be coaxed into it. Competition is important, but sometimes there are shy or anxious kids who need that extra boost. And I wasn't at all surprised when this rant segued into "entitled new hires who think they deserve to be promoted after only a year - here, have a cookie" BS. Millennials have it pretty hard right now: shitty economy, a dearth of jobs that lead to viable career paths, opinion post after opinion post about how millennials are ruining the world with avocado lattes and $50 eyeliner. And OK, I get it, I've met some entitled millennials, but I've also met some entitled Baby Boomers, too.

Apart from that, I enjoyed this book. It isn't PC and I'm sure she'll offend as many people as she entertains, but it was an honest, straightforward look about life that didn't feel like it was try to sell something or portray motherhood and adulthood as the Holy Grail. I appreciated that.

Also, FWIW, my mom is the most important person in my life and I love her a lot, and reading this book kind of helped me get a better look at what raising me was probably like from her perspective, and how frustrating I probably made her life at times (spoiler: as a kid, I could be an unapologetic little shit). Despite all the grief I must have put her through, she was always unequivocally in my corner, and did whatever she could to make me happy - or failing that, keep me safe (to a kid, happy and safe are not always mutually inclusive: for example 90% of things involving trampolines).

Thank you, Mom. I love you.