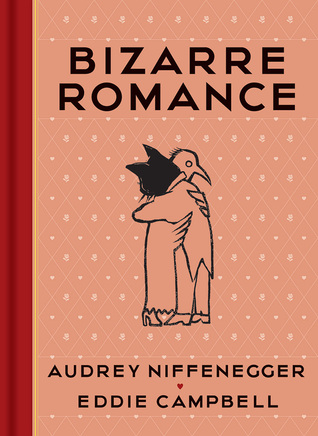 When I'm sick, the most comforting things for me are books and tea. So I'm parked in an armchair right now with a giant fleece blanket, a Big Gulp-sized cup of unsweetened iced tea, and a pile of books, trying not to feel so much like poop. What better way to do that than to work my way through a bunch of ARCs that aren't coming out until later this month? Ha-ha-*cough cough cough cough*-ha-*cough*-ha, suckers!

I was really excited when I saw BIZARRE ROMANCE pop up on Netgalley because I really enjoyed THE TIME TRAVELER'S WIFE, even (especially!) if it was like Dr. Who meets TWILIGHT (and you might say to yourself, "There is no way that premise would work." WRONG!). I was excited to see what new and interesting ideas she would explore using graphic novels as her medium, with the assistance of the talented Eddie Campbell, whose surreal illustrations really complement the bizarre stories.

BIZARRE ROMANCE is an anthology-like collection, with each "chapter" being a different story. The problem with anthologies is that, unless they are carefully curated, there are always some stories that stand out way more than others and a couple that actually drag the collection down as a whole. One of the few anthology collections I have read that was close to perfect was John Scalzi's MINIATURES, and even that one ended on a sour note with a wtf-is-this finale.

Comic format. This was easily one of my favorites in the collection. I'm a huge fan of fairytales and this one has an almost Bluebeard's Castle vibe to it, but there's a surprise twist that's actually quite funny.

Prose format. The title illustration was amazing, which sadly only highlighted the mediocrity of the story itself. This short story gives off a pretentious, twee vibe that I really did not like.

Comic format. Wow, what a mouthful. This is a strange, surreal story that is clearly inspired by tales like Alice in Wonderland and Narnia, but the bittersweet ending makes it feel more adult.

Prose format. Ooh, I did not like this one at all. A creepy cat lady story? No, thank you! Also, this one ties into the "romance" theme only very peripherally. Definitely a detriment to the collection.

Comic format. After Thursdays, Six to Eight p.m., this was probably my second favorite in the collection. An old school fairy tale, where the fairies are manipulative and sneaky.

Prose format. I hate giving this one a one-star, because it was the only LGBT story in the mix, but it was so boring, my eyes glazed over.

Jakob Wywialowski and the Angels: ☆☆☆

Comic format. Kind of a surreal story about angels invading somebody's attic. I liked it, in spite of its strangeness, although it sticks out because it isn't about romance.

Prose format. This one was forgettable but inoffensive.

Prose format. One of the better prose stories in here. Like The Ruin of Grant Lowery, it's also about making bargains with fairies, but the fairies are nicer in this one. Nothing to do with romance, though.

Comic format. Literally what it sounds like. A seemingly autobiographical story of the author digging up her dead cat from the front yard of her old house to rebury it in front of her new house.

The Church of the Funnies: ☆☆

Comic format. One of the sadder stories in the mix, about a woman on a cruise with her elderly father. The topic is more about familial love and regret than romance.

As you can see, the stories done in comic format tended to be much better than the ones told in prose format, with a handful of exceptions. There were also quite a few stories that had little to nothing to do with romance, which made the anthology feel disorganized - particularly in the case of Digging Up the Cat and The Church of the Funnies, which took away from the surreal, fairytale-like theme.