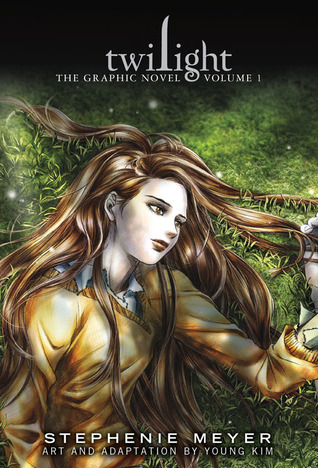 You know what's embarrassing? Going into a thrift store when you're almost thirty years of age and buying Twilight: The Graphic Novel while the teenage male cashier judges you.

WHATEVER, TEENAGE MALE CASHIER. I REGRET NOTHING. AND NOW I HAVE TWILIGHT: THE GRAPHIC NOVEL AND YOU DON'T. SO I WIN.

When this book first came out in 2010, my first thought was, "Are you kidding me?" It looked like a cash grab to capitalize off the movie. Twilight mania was in full swing and you literally could not go anywhere without hearing someone talk about it. I initially liked the books, but the movies and the fans turned me off the series so fast because there was no escape.

Well, now that I've read the book for myself, I have revised this opinion. Yes, it is a graphic novel of a book that was turned into a movie but... the art is beautiful. Young Kim did such an amazing job. The expressions, the use of color... even the text they used... it's all so gorgeous, and fits the tone of the story far better than the movie ever did. I feel like the scenery and the looks of the characters were much more true to form.

You may be asking yourself, "What's the point?" Well, if you enjoyed TWILIGHT and you're the type of person who would buy one of those Harlequin manga (yes, they exist; yes they are awesome - YOU WOULD BE SO AMAZED HOW WELL ROMANCE TRANSLATES TO MANGA), then you should definitely get this book for your collection. I know it's going to stay in mine. <3

I kind of want to revisit the novel now. It's been sitting on my dresser, waiting...