Angel in Scarlet by Jennifer Wilde 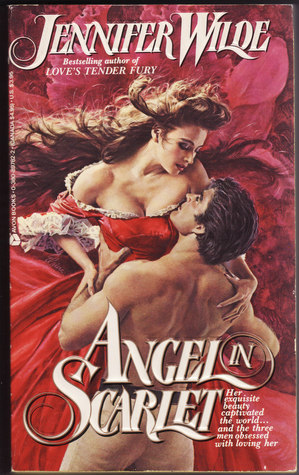 ANGEL IN SCARLET went on sale recently for $1.99 and I figured what better occasion than to do a buddy-read with my dear Goodreads friends, Korey and Vellini. Jennifer Wilde is the pen name of a male author, T.E. Huff, and he's rather infamous for his smutty, purple prose and sex-pot heroines. We're talking trashy fiction of the V.C. Andrews caliber. The only book of his I read before this was LOVE'S TENDER FURY, which is very much a traditional bodice ripper with its themes of slavery, rape, and general wtfery that boggle the rational mind.

ANGEL IN SCARLET is not a bodice ripper. There is no rape (although there are some unconsummated attempts at forced-seduction). Our heroine is named Angela, and she's the daughter of a teacher, and has two step-sisters and a step-mother. The step-mother ends up being a villain later on (madam of a whorehouse), but the two step-sisters are actually pretty chill and one of them, Solonge, intrigued me far more than the heroine did.

Angel is an okay heroine as far as heroines go. She has a lot of moxie. She punches people, bashes would-be rapists over the head with their seduction champagne, flips people the finger, kicks bad men in the testicles, and tells anyone she cares to (namely everyone): "SOD OFF!" It's basically her catchphrase. A woman like Angel is obviously too much for one man, and she sleeps with several over the course of the book - something she shares in common with Marietta Danvers from LOVE'S TENDER FURY. Unlike LOVE'S TENDER FURY, however, these relationships are all basically consensual. There's her childhood love, the bastard son of nobility: Hugh. Then there's the temperamental playwright who sees her as his muse, James ("Jamie"). And lastly, there's Lord Meredith (Clinton), Hugh's half-brother: an entitled, spoiled, selfish, womanizing lord. On top of all this, Angel goes from being lower middle class to working in a gambling den, to becoming an artist's "Gibson Girl", to becoming an accomplished actress, to becoming a lady of the nobility herself.

I wanted to like this book and at first I did, because it was refreshing to read a vintage novel where the heroine wasn't a victim: who was actually quite empowered when it came to seizing life by the balls and doing whatever the hell she wanted. Unfortunately, there were several setbacks that made this book incredibly difficult to get into and really dampened my enjoyment of it.

-: The writing is incredibly repetitive. Wilde repeats the same phrases over and over. All gowns are cut "provocatively low" or "dangerously low" to the point that you can almost see one's "bright pink" nipples. Angel's "chestnut waves" are always dangling into her "violet-gray eyes." There are paragraphs and paragraphs of costume pr0n that are basically cut and pasted reprises of prior descriptions. Hint: embroidered waistcoats, lacy jabots, lace spilling from the sleeves. There are also paragraphs and paragraphs of food pr0n, and while I liked these better, they weren't necessary to the plot. I could really feel the 600 pages of this novel - especially towards the middle, where it began to slog. I think about 200 pages of this could have been cut while still preserving the overall novel.

And he pounced upon me and we wrestled vigorously and it was joyous and he pinioned me and the match continued and it was delightful and he entered me and I writhed and he bucked and I thrashed and he plunged and it was glorious, glorious, sensations shimmering, soaring, and I fought and he retaliated and I gave and he took and he gave and sensations swelled and shattered... (48%)

...onto me he crawled and into me he plunged, filling me fully, strong, straining. I wrapped my legs around him and he reached out, groping, and got one of the cushions and positioned it under my hips and pulled back and plunged and pounded and repeated and I raised and reared and our movements matched and magic and marvelous sensations besieged us both (55%).

...the room in darkness now, now the warm hardness of him entering slowly, slowly, plunging then to fill, holding for a moment and then slowly withdrawing, so slowly, plunging again, flesh filling flesh, his hard and strong as steel and soft as velvet, my own clutching, clinging, my body arching to meet him, to bring him closer still... (68%)

-: I also couldn't quite pinpoint the exact time period because the author uses some very anachronistic language like "yeah" and "bitchy affection." I think it's mid-Georgian because the author makes several references to plays like She Stoops to Conquer and The Vicar of Wakefield, and if it was Victorian, I'm certain the author would have referred to Oscar Wilde or George Bernard Shaw.

Something that confused me, though (regarding the time period) was the way Angel's acting career was treated by others. She rubs elbows with royalty and is generally well-respected by the town, but in Regency England, acting - especially for women - was seen as an ignoble profession that was pretty much regarded as being as base and derided as a prostitute. Public opinion on that didn't really start to shift until the late 19th century, from what I understand.

I did like the ending, which was unexpectedly bittersweet, and Angel was an interesting character, so I'm rounding this up to 1.5 stars. But this is by no means one of Jennifer Wilde's better efforts, and if you're a first-timer hoping to get in on the bodice ripper craze, I'd urge you to pick up LOVE'S TENDER FURY instead.