Smashed: Story of a Drunken Girlhood by Koren Zailckais 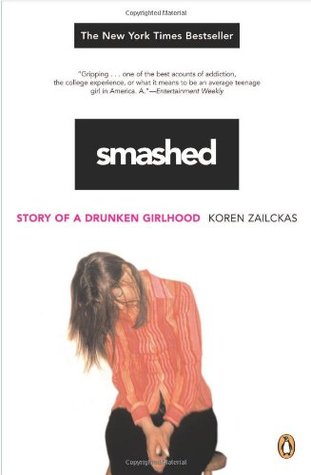 Recently, I read VALLEY OF THE DOLLS, and where some people seemed to see a trashy, bloated novel about fame-seeking women acting self-destructive for no particular reason, I saw a brilliant character study of ambitious women who could not cope with the cognitive dissonance of achieving their ambition while abiding by convention, and self-medicated their ensuing anxiety with sleeping pills and alcohol. That's kind of how I felt about SMASHED. SMASHED was published at the height of 2000s party culture, when Playboy bunnies were still seen as "cool" and you could get the necklaces at the mall (a lot of the girls in my high school wore them); Jackass the Movie was in theaters; Girls Gone Wild was a pop cultural phenomenon; and every Easter like clockwork, advertisements would run for tickets to the beach boardwalk for SPRING BREAK.

Don't get me wrong - this is definitely a memoir about substance abuse and drinking. Koren chronicles the start of her using from the age of a very young teen, and pushes forward, slowly, into her twenties. We see her at her worst, again and again, because the bar keeps falling. However, the culture she describes then feels so much more different than it is now, and really made me appreciate how much attitudes have changed over the last ten years with regards towards women, rape, sexuality, partying, and alcohol. That isn't to say that society is to blame, necessarily, when it comes to addiction and other problematic behaviors, but I do think that it can be a facilitator when people with a predisposition for such behaviors find themselves reinforced, again and again, by our cultural norms to engage in these behaviors.

I don't think it's appropriate to say that I "enjoyed" Zailckais's story, but it did move me. Her writing is beautiful (I'm a bit amazed by how many people criticized the writing in this book in some of those other reviews - she was in her early twenties when she wrote this book, and she demonstrates a level of self-awareness and reflection that escapes most people in their forties), and features some of the best prose I've ever encountered in a memoir. The subject matter itself is incredibly disturbing, but necessary. She came here to tell her story, and tell it she does, no holds barred. It's a brilliant snapshot of what it was like to grow up in the 90s and 00s, and is also an intimate portrait of alcohol abuse, told in a way that I think will be really accessible to and resonate well with younger individuals.