Theory of the Hashtag by Andreas Bernard 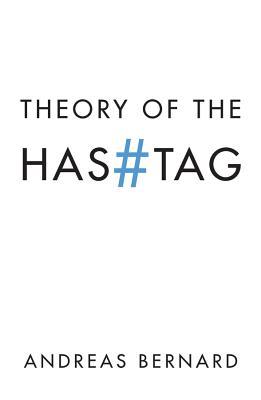 I've been told by some of the people following me that part of the reason they began following me in the first place is because they never know what I'm going to read next. And I suppose that's true-- on a given day, I could be reading a popular YA bests-seller, a B-list celebrity memoir, a bodice-ripper from the 1980s, or a textbook about the history of the hashtag in popular culture.

I suspect a lot of publishers have a hard time getting scholastic books of nonfiction into the hands of readers, so I'm usually pretty happy to take one for the team if it seems to come from a reputable university and the subject matter is interesting. As a blogger, I've seen firsthand how instrumental the hashtag is in marketing and indexing data online, and how it can mobilize disparate users into a singular, powerful force.

THEORY OF THE HASHTAG is a very short book. On Goodreads it says it's 200 pages, but about half of that consists of references and further reading. The actual meat of the book clocks in at just over 70 pages. Even though the book is so short, Bernard still manages to give a pretty solid overview of the hashtag, talking about its origins as the number sign and the pound sign (which apparently used to be used to denote actual poundage, which I did not know), and some of its lesser-known names, like the octothorpe, before getting into how it actually became used as a means of archiving and indexing keywords online, like a fantastically virtual Dewey Decimal system that requires no training.

Moving on from that topic, Bernard switches into how the hashtag is so useful for indexing, and how it's easy to track, so it's useful from an advertising, activist, consumerist, and sociologic perspective, as it provides valuable data about who is posting about what, why, and when; as well as mobilizing users who need to project their voices; and essentially providing a channel that is easy to find with a simple search. Of course, the #MeToo movement and #BlackLivesMatter movements are both discussed, and the author talks about how the hashtag helped unify all these users to a single cause.

The book ends on a bit of a questioning note, in my opinion. It's unclear what the future of the hashtag might look like. Some people have started to use it derisively or ironically, as now that the hashtag has become part of popular culture, the counter-culture feels an obligation to mock it. He also talks about the legality of the hashtag, in the sense that it is very difficult to copyright because the very purpose of it is to share and unify. I was disgusted to find out that greedy companies apparently tried to file copyright claims for #icantbreathe and #JeSuisCharlie-- people that had no hand in creating the hashtag in the first place-- which just goes to show the perceived power that these viral hashtags have, and how much people covet that sort of massive influence. It's still gross, though.

This is a short but interesting book about a humble punctuation symbol that many of us in the twenty-first century now use every day. If you are interested in learning about the lesser-known histories of everyday things, I think you'll really like this book. I really learned a lot. #octothorpe