The War Queens: Extraordinary Women Who Ruled the Battlefield by Jonathan W. Jordan 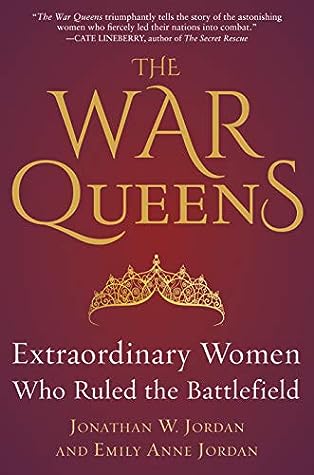 History can be dull as dishwater, so I'm always impressed when an author can bring the dead to life-- no, not using necromancy, but their "skillz" as a writer. I can guarantee that some people are probably going to take issue with the breathless, sensationalist way that this is written, but I found it incredibly entertaining. I actually hate nonfiction that is too dry, and as long as you're not muddling the facts, you can be as silly in the narrative as you want.

THE WAR QUEENS is a collection of mini biographies about queens and political rulers who were involved in major coups throughout history. Some of them might be familiar to you, like Cleopatra, Margaret Thatcher (not really a queen, but OK), and Queen Elizabeth I, but there were a couple new ones to me, like Tomyris of the Massagetae (part of the Persian Empire), which was some pretty hardcore stuff-- and then there was Caterina Sforza's "I give literally zero forks" shenanigans of the Italian Renaissance which was like something out of Game of Thrones. Oh, and the African Queen, Njinga, who was my favorite, because she literally did not care who or what she had to defeat to gain success.

One thing I really liked about this book is that it wasn't limited to queens of the Western world-- there were Queens from the Persian Empire, Queens from Asia, Queens from Africa, and yes, of course, Queens from Europe. All of them were interesting in their own way (except maybe Margaret Thatcher-- I really don't like her, and she's not a queen, so she doesn't even go here). I think if you're interested in history but wish it was a little less male-centric, this is a really eye-opening piece to learn more about some pretty fascinating kick-butt women dating from ancient to modern times.