One Fell Sweep by Ilona Andrews 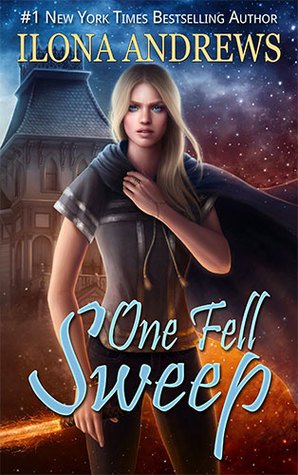 Holy second book syndrome, Batman! CLEAN SWEEP was a light-hearted, action-packed adventure with just enough conflict to keep everything steamrolling ahead. SWEEP IN PEACE, on the other hand, was totally different in tone - it was much less like the UF/PNR that CLEAN SWEEP was, instead veering more towards traditional sci-fi territory with its delegations and political intrigues among various alien beings. The pacing was also much s l o w e r.

SWEEP IN PEACE wasn't a bad book, but it didn't grip me the way CLEAN SWEEP did and I had a really hard time finishing it. It took me about a month to finish the book, and I considered DNFing several times. When I finished, I found myself to be completely underwhelmed - especially because of the Hidden Legacy series.

I asked myself, "Should I even bother reading ONE FELL SWEEP?"

Well, now that I've finished the third book in the series, I can safely say, yes, yes I should. Team Andrews found the successful formula that makes their books like crack. The fast pace is back, along with action, interesting characters, a good secondary romance, and enough sexual tension to keep everything feeling just steamy enough to make you go, "Oh, that's good."

Helen and Maud were awesome. Mrak was a great villain (and hot - why are villains always hot?) Orro continues to be my absolute favorite (in fact he kind of reminds me of Kif, from Futurama, if Kif were a hedgehog chef). Caledenia is awesome. And let's not forget the star herself, Gertrude Hunt, AKA the best house ever.

There was more of an emotional connection in this book as well, especially in the last quarter, where my heart actually started to hurt. So much happened, to the point where I began skimming the pages just to make sure that everything was going to turn out all right. And it did...sort of. But also not.

At this point, TEAM Andrews could write some gibberish on a cocktail napkin and I'd probably pay money to read it.