How the Right Lost Its Mind by Charles J. Sykes 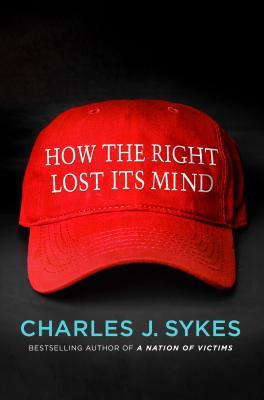 I've been fed up with this new administration since, well, day one. When I found out you-know-who was running for you-know-what, it was like one of those stupid jokes with an offensive punchline. "What, is this supposed to be funny?" I asked myself. "Who the hell would find this funny? Thirteen-year-olds? No, this is just dumb." But then he won, and it stopped even looking like a joke. It started to look to me like something was very, very wrong with the personal philosophies of a disturbing amount of Americans. How else to explain the sudden and mind-blowing abundance of anti-Muslim, anti-gay, anti-immigrant, anti-minority, anti-woman, anti-LGBT rhetoric that seems to be an integral part of the platform holders?

HOW THE RIGHT LOST ITS MIND is actually written by a conservative who feels similarly disturbed by his party's willingness to, if not outright embrace xenophobic and bigoted views, than at least tolerate them for the sake of sticking it to their opponents. He says from the beginning of this book that HOW THE RIGHT LOST ITS MIND is not going to be a treatise on Trump; instead, the goal of his book is to show the shift in conservative values that led to his being elected in the first place, and chronicling the rise of the alt-right.

I did not really enjoy this book since it felt, to me, that Sykes beat the dead horse a bit. I understood from the get-go why economic turmoil left many working class people feeling disenfranchised; I also understood why the left was not a viable platform for them, because they felt that their needs were not being given sufficient priority over the social issues that make the right so quick to call us "bleeding-heart liberals". One of Hillary's biggest mistakes during the election, in my opinion, was not addressing the thousands of people who were feeling frustrated and angry and ignored.

He touches upon other issues as well, such as fake news and the Tea Party and other extremists who ended up being characteristic of the party later on. While Sykes, to his credit, never excuses his party from culpability, he does also gaslight liberals, saying that they are at fault for "crying wolf" to such an extent that people became deafened to claims of bigotry...which I thought was odd. Similarly, there's an odd quote (in one of my status updates) in which he praises Paul Ryan. Which, okay.

I suppose when it comes down to brass tacks, I agreed with maybe 60-70% of Sykes's points. He is very articulate and makes a lot of really good arguments (even making a few valid criticisms of the left). When it started looking like Trump would win, I began watching interviews with conservative voters because I desperately wanted to understand why people would vote for such a candidate, and ultimately I came to many of the conclusions that Sykes came to here. I was hoping for something fresh and new, and perhaps a more thorough deconstruction of Trump's policies, so that was a disappointment. Still, if you're left-leaning and would like to read an interesting think piece from someone across the political pond that won't have you hurling the book into space, this is your guy.