I Do It with the Lights On: And 10 More Discoveries on the Road to a Blissfully Shame-Free Life by Whitney Way Thore 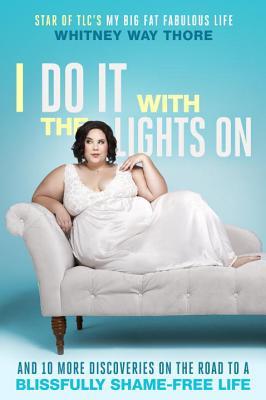 I have had issues with my weight and body image for close to ten years now. In fact, just the other day, I found myself staring at a BMI chart and thinking about how so many of our beauty standards are utterly subjective. Knowing how ridiculous these measurements are does nothing to ease the bad feelings in most cases, either; our ideas about body image are so ingrained in our society that many of us will swallow them without a thought.

I DO IT WITH THE LIGHTS ON was written by Whitney Way Thore, who is apparently on a show called My Big Fat Fabulous Life. I haven't seen the show, but I was interested in the memoir because I think body positivity is important. Ever since Tess Holliday received her controversial modeling contract, body positivity and image are starting to get more focus in the media. But a lot of people don't seem to fully comprehend what it entails.

"Love yourself," the media says, "but only if you have a body worth loving!"

This memoir starts from Thore's childhood and continues to the present day. She discusses the diet her mother put her on at a doctor's urging because she was a pound heavier than the average ten-year-old should be. She talks about the eating disorder she developed to be "normal-sized" & the cycles of starvation, excessive exercise, and purging she got into in order to maintain her size. She relates stories from her dating life, and points out the differences between body positive men and men who fetishize fat. She also talks about her rise to fame after one of her Fat Girl Dancing videos went rival, and how - even after this long and arduous journey - she is still insulted on a daily basis about her weight and appearance.

I DO IT WITH THE LIGHTS ON was a difficult read for me - partially because I could relate to the weight struggles in some ways, and partially because her experiences were so painful that I really just felt awful for her. Her parents' seeming attempts to deal with their own issues by projecting them onto her was terrible. Her trip to Korea, which should have been a fun experience, resulted in tons of insults and gawking and humiliation. And the men she encountered on various dating sites, who treated her like she was worth about as much respect as a plus-sized blow-up doll, were sickening.

On that note, I think it's an important read precisely because it's so uncomfortable. Thore forces you to think about why fat is viewed as such a bad thing, and how many of the "standards" we set for weight are really just lose/lose scenarios, because it's a rigged game from the start. The opening chapter is a little rocky because it starts out with Thore publicly calling one of her trolls on the carpet, but by the end of the book, you will definitely feel like her annoyance is more than justified. Her attempts to stay healthy despite a diagnosis of PCOS are admirable, and her dancing is incredible. She really doesn't fit society's stereotype of a "fat girl" and if you ask me, that's a damn good thing.