The Wild One by Danelle Harmon 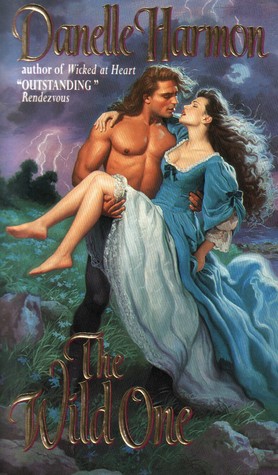 💙 I read this for the Unapologetic Romance Readers' New Years 2018 Reading Challenge, for the category of: Historical Romance (Any). For more info on this challenge, click here. 💙

Dammit, 90s bodice rippers - how can I keep making fun of you if you keep being so...good? Earlier this year, I read a 90s Western romance about two ranchers called WILD TEXAS FLAME that I fully expected to dislike, and now this book, THE WILD ONE! Maybe only 90s bodice rippers with the word "wild" in the title are exempt from this rule...but clearly, I have to do some reevaluating of my stance when it comes to 90s bodice rippers; some are good!

This is actually my second experience with Danelle Harmon. Last year, Heather and I buddy-read one of her pirate romances, called CAPTAIN OF MY HEART. With a title like that, I wasn't expecting much, but the story was a well-researched romp on the high seas set during the Revolutionary War, featuring a spitfire heroine and one of those charming, gallant alpha-heroes, who is both gentlemanly and protective, but not an a-hole.

THE WILD ONE's hero, Gareth de Montforte, is cast in the same mold. Gareth was the third Montforte brother, with his older brother, Charles, standing to inherit the dukedom if anything should happen to their older brother, Lucien (God forbid). Unfortunately, when Charles dies in the Revolutionary War, Gareth becomes the heir. And he's the one nobody expected: the rakehell and the wastrel, who would rather get drunk and paint the peens of statues with purple paint with his buddies (true story) than do anything approaching real work. He meets the heroine when he acts rather out of character, and takes charge to stop a group of highwaymen from attacking a carriage.

The heroine, Juliet, is shocked when her rescuer is none other than the brother of her late, would-be husband. Unfortunately, since said would-be husband perished before he could marry her and left her with a babe born out of wedlock, she's forced to throw herself upon the mercies of the cold and icy duke, who doesn't really see her as a person so much as an opportunity to force Gareth to behave. Let's just say that old habits die hard, and Gareth's pride leads both him and the heroine to many thorny situations, involving but not limited to dens of iniquity and the criminal underworld.

I really enjoyed THE WILD ONE. Danelle Harmon has a very fun way of writing that flows very naturally and unfolds as though you were experiencing everything firsthand yourself (she has a knack for describing things in the order and the way that someone experiencing those situations would probably notice them in real life, which I love), but without the historical anachronisms that often riddle such chatty-style narratives. I think Sarah said in her review that the only word she noticed was "barf," which wasn't actually used commonly until the 1960s. Oops.

If this book has a weakness, it is the sex scenes. They are rather flowery and terrible. There was a particular noteworthy scene in which Juliet's parts are described as a pink cradle, and Gareth's parts often resemble Ms. Perky's writing efforts in 10 Things I Hate About You, with the word "engorged" and "tumescence" actually being used 3 times altogether on one page (it kind of makes you wonder if one of the writers of 10TIHAY had just read this particular book, and was feeling salty).

I'd read further into this series, though. I'm starting to really enjoy this author's works because I know she can be counted on to tell good stories, and I desperately want to read Lucien's book. #IcyDukes

Thanks to my buddies, Draco, Harry, and Hermione for participating in this BR with me!