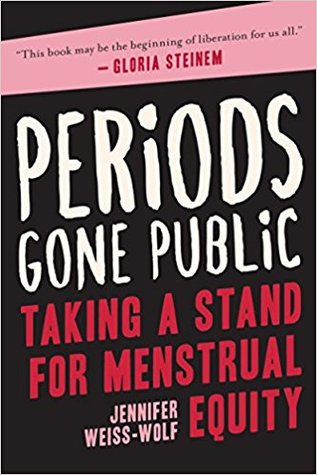 I'm side-eying the heck out of this book right now because it was a special kind of fail. First, I'm reviewing this as a feminist, and whenever I read a political book, I try to approach it with an open mind - regardless of whether it's being written from a perspective I agree with or not. In this case, I did agree with the basic premise: menstruation should not be a charged or taboo subject. It happens to 50% of the population, it really sucks for the people who experience it, let's talk about it and find ways to make the existing products for it less environmentally harmful and also suck less - especially for low-income individuals and women in other countries who don't have access to the hygienic supplies that they need at all. Totally down with that. How can you disagree?

So the fact that I agreed with this book and still didn't like it says something. What does it say? The author - in my opinion - did not write a very good book. I'd say 85% of the problem was tone. It's super ironic that she quotes Andi Zeisler's WE WERE FEMINISTS, which is a condemnation of people who commandeer the feminist movement to promote their own personal agenda, because Weiss-Wolf toots her own horn in PERIODS GONE PUBLIC a lot. We get to hear about all the projects she participates in - and yes, that's wonderful. But also not what I wanted to read about. And the way she talks about it is a bit difficult to explain, but to me it felt a little smarmy. Especially when she refers to low-income individuals as "the poor." It came across as sounding very privileged to me, which made reading this book unpleasant.

I was hoping for something more science-based/philosophical/historical, but PERIODS GONE PUBLIC is more of a collection of anecdotes and trivia. The sections about low-income individuals experiencing periods and women in developing countries experiencing periods was interesting, but Weiss-Wolf wrests control of those narratives and they feel like they're being written from a decidedly egocentric perspective. Weiss-Wolf particularly seems to like pop culture, and lists some of the celebrities she admires and credits with furthering the feminist movement. These individuals include Jennifer Lawrence, Amy Schumer, and Rupi Kaur. When I read this passage, things became clear. I thought to myself, "Ah, she's a Tumblr feminist." I call them Tumblr Feminists, but really, they're social media feminists generally, who seem to support a feminism that's bite-sized, neatly labeled, and superficially pleasing brand of feminism. It's the shiny, attractive feminism that celebrities love to embrace: sexual pride, body positivity, free pads for everyone!  I feel that this applies to Weiss-Wolf, and while these things are important, there are far more pressing issues.

Now, to Weiss-Wolf's credit, she does cover some of these less savory issues and she has good taste in books (love Zeisler, love Steinhem - Rupi Kaur? Not so much - ugh, Tumblr poetry). I also like that she took the time to write about periods from a trans perspective, and how we look at menstruation frequently from a straight, cis-gendered perspective (periods = child-bearing, heteronormative experience) . It actually made me think of this video I watched on YouTube, a how-to video for trans women who wanted to create artificial periods with cornstarch and food dye so they could experience that aspect of womanhood, too. I've read a lot of articles and watched a lot of YouTube videos about periods (BuzzFeed has really tapped that well dry - I noticed they had an article about periods today, even), and a lot of what they have said was covered here by Weiss-Wolf, so maybe that was another problem - I'm burned out on periods.