#MeToo: Essays About How and Why This Happened, What It Means and How to Make Sure it Never Happens Again by Lori Perkins 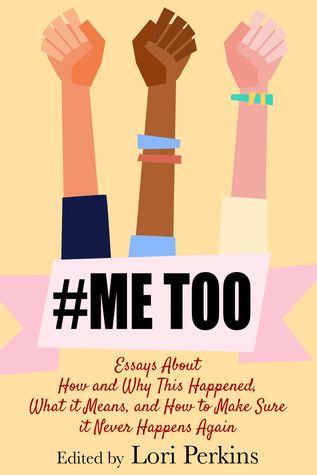 The #MeToo movement started originally in 2006 but really gained steam this last year, following the allegations of sexual assault by Harvey Weinstein from a number of women. Women all over the world took to social media websites to share their stories, or simply show solidarity, with the hashtag, #MeToo.

I have a #MeToo story. I was seventeen years old and walking home from school. A bunch of men in a car followed me, shouting lewd things (I've forgotten most of them, but one of the most salient was "How much do you cost?"). I was so terrified that they were going to get out of the car and grab me that I began planning several courses of action on how to either run or fight back, all the while staring straight ahead and trying to give no sign that this was bothering me, even though I was blushing and near tears. Eventually the men went away, bored, and I went home, and cried. It was 95-degrees and I was wearing a long skirt and a tank top. I never wore either ever again.

#METOO is a collection of essays written by a variety of contributors. Most are written by women, but there are a few men contributing too, and a few of the writers are also LGBT. Most of the essays are #MeToo stories about the writers' own experiences with sexual harassment, assault, or rape. Some of the essays analyze the toxic cultures that propagate misogyny and abuse. Some analyze the psychology of the abuser. Some discuss potential solutions. One of my favorite essays, written by one of the male authors, is about how important it is for men not to co-opt the movement with secondhand outrage ("this is somebody's daughter!") or the expectation of brownie points ("I would never do this!"). He is properly scornful of such attitudes. I adored him for it.

It's not really possible to say that I enjoyed these essays, because these essays were not written with "entertainment" in mind, and that is certainly not the mindset one should be in while reading them. Some of the stories just about broke my heart. I was able to sympathize with many of the essay writers, and could appreciate many of their points. I'm giving this three stars because, as with any anthology, the collection was uneven. Some of the essays were really short - less than a page - and didn't really have enough room for compelling arguments. One of the essays was sloppily written and felt rushed (it was also the only one with a typo). One of the essays by the male authors was filled with mixed messages and quickly got on my nerves. I didn't hate any of these essays but there were more than a few that I didn't really care for.

The important thing is that this collection of essays represents a fairly broad spectrum of experiences and opinions, despite being less than 100 pages long. Even if you don't like all the essays in here, what didn't work for you might be the balm that somebody else needs, the tale that makes them sit up and realize, "This happened to me, too. I'm not alone."