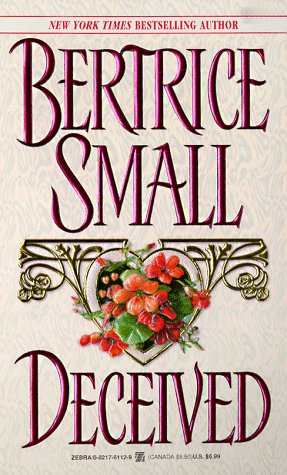 The last book I read by this author - ADORA - was so messed up that I almost gave it 5 stars for sheer daring alone. Even though her purple prose borders on ultraviolet, there's something about her style and her penchant for gleefully sadistic psychodramas that makes it hard to put the book down, no matter how raunchy & offensive it is.

DECEIVED is a completely different animal. ADORA took place in medieval times, during the end of the Ottoman Empire. DECEIVED takes place in Georgian-period England. It's about two step-sisters, Charlotte Calandra Kimberly and Charlotte Aurora Kimberly, who live on a sugar plantation in the Indies, on an island named St.Timothy that's a stone's throw away from Barbados.

When Aurora finds out that her father posthumously arranged for her to be engaged to be wed to the duke of Farminster, she is outraged, because she wants to marry for love and not because a pair of dead fathers said so. But the marriage contract never specifies exactly which sister is supposed to be married, and since Aurora and her step-sister both conveniently have the same first name (they go by their middle names to avoid confusion), Aurora cedes her inheritance (the plantation) to her half-sister with the understanding that Calandra will marry in her stead.

The duke, Valerian, thinks Calandra is beautiful, but there's something about headstrong Aurora that tickles his fancy, IYKWIM. And if you think his engagement to Aurora's sister stops him from spying on Aurora while she swims nude, pull up a seat, because you must be new here, and you're about to get schooled. Aurora is very much in tune with her sexuality and masturbates on the regular, but Calandra thinks of it with revulsion, and an awkward birds-and-bees talk with her mother and sister doesn't help (nor does an equally awkward, borderline incestuous mutual masturbation scene with her sister - thank you, Small, I was wondering when the weird sex stuff would rear its head).

Anyway, the marriage with Calandra goes through but horribly because Calandra has no interest in sex, and uses her duchess status to snub people she deems inferior while spending the duke's pocket money. He's not happy about this, and in his frustration, he begins to obsess over Aurora and what a better wife she would be (little does he know...). Eventually, we find out that Calandra hates men and sex in general because she was molested as a young girl by an overseer on the plantation. She confesses this to Valerian, who decides to deal with this information by raping her in order to get her with child. He shakes his head over it after the fact, bemoaning that she drove him to such acts.

Calandra gets pregnant and depressed. Aurora fights her attraction to the duke, and vice versa, while also waving her romance with his cousin, St. John, in his jealous face. Calandra ends up dying in childbirth, and we get to find out that her child was actually a deformed conjoined fetus (which, funnily enough, happened in ADORA, too). Valerian finds out that he married the wrong sister, and rapes Aurora before Calandra is cold in her grave, arranging for them to be married the day after. I guess this would probably be defined as "forced seduction" by the die-hards because there's a bit of "no-no-yes-yes-yes!!!" going on, and Aurora decides that her desires just can't be denied, after all.

The last third of the book is the most boring, because it's the section of the book where all the unresolved plotlines (i.e. the secondary characters) are resolved (i.e. punished or married, as befits their characters). Aurora and Valerian can't keep their hands off each other, but it's sooo scandalous because she's the widower's sister-in-law. Aurora ends up befriending Queen Charlotte & making all the jealous ladies jealous. One of Calandra's friends, whose name I can't remember or spell, makes a rather lame attempt to get revenge and sully Aurora's good name, and gets his comeuppance. I roll my eyes a lot at words like "love grotto" and "love juices". Also, the bad guy likes butt sex!

I'm not really sure how I feel about this book. There were several attempts to inject this book with some dime store feminism - about how terrible it is that men can sleep around and women can't, and how more women should masturbate because it makes sex less terrifying - but it doesn't really work, because all the men are very misogynistic and there is a lot of rapeyness. It feels censored, honestly, and since this book was written in the 1990s, I can't help but wonder if Small was starting to receive flack for the wild and outrageous plots of her earlier books from critics & was trying to tone it down.

Since I love me a good psychodrama, I read this book to the end. It was like candy; I finished it pretty much in one sitting. Like candy, it also didn't particularly sit well with me afterwards, but I didn't care, because candy is candy, and the regret is part of the reward. I would NOT recommend this book to people who are new to Bertrice Small, because her older books are much, much better. I also would not recommend this book to many of my feminist friends, because I think it would piss them off. But if you like romance novels that read more like malicious soap operas than actual depictions of love, then this is the book for you, my friend, this is the book for you.