Across a Wine-Dark Sea by Jessica Bryan 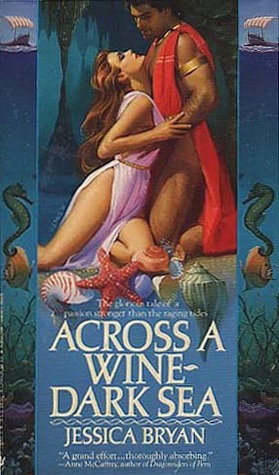 I'd been lusting after this book for a while, partly because of that beautiful cover, and partly because it's a romance between an Amazon and an Atlantean. Ummmm, shut up and take my money? Also, that man on the cover is not wearing anything under that robe, so there's lots of sexy naked thigh action (even though his junk appears to have been photoshopped away for the sake of propriety, rather akin to the "missing nipple" phenomenon you see on many an erotica cover).

Sadly, the book itself did not live up to that glorious cover. Which was upsetting because the premise and the intro itself were quite good. I liked Thalassa and the Amazons. Who doesn't want to see a bunch of body positive, warrior women having sex and slaying misogynists? It's basically a blood-thirstier version of those Smash the Patriarchy necklaces on Etsy. Except instead of a hammer, they use a bipennis (and no, that's not what you think it is. This is, though! You're welcome. ;D)

The problem comes in the form of the hero, King "I'm a nice guy, I swear" Dorian, of the mer-people. Dorian is a nice guy. He will tell you this constantly. His people tell his victim, Thalassa, this constantly. But Dorian is not a nice guy. He kidnaps Thalassa from her people, turns her into a mer-person without her consent by magic, threatens her with the Sea Spell which will erase all her memories of her past life and render her docile, and repeatedly threatens her with rape.

I couldn't quite get over the body modification. I'm still kind of hung up on that. I mean, he gives her gills & changes her physiology by sticking her with a needle repeatedly. That's some serious Dr. Moreau shit right there. The concept of the Sea Spell was also disturbing, because apparently this is standard process for abducted brides among the mer-people and Dorian gets into serious trouble with the elders for not using it. I know we're supposed to applaud him for not doing this, because he loves her the way she is, but that, to me, is tantamount to clapping some bro-dude on the back and saying, "Good job for not raping that unconscious woman! Great self-control, dude!" Why someone should be applauded for not taking away someone's memory and free will is highly questionable to me because no decent person should do this, period. You shouldn't be rewarded for doing what any decent hero would do. Which begs the question: is Dorian a hero? He's an alpha who dreams of being a beta, but secretly also wants to be a gamma. I almost feel like the author would have been better off writing him in the style of a classic bodice ripper "hero": that is, someone completely without scruple, who does what he pleases, when he pleases, and God help you if you get in the way of that Master Plan. That I think would have been a better characterization for a needle-happy despot who thinks you need to be cruel to be kind.

ACROSS A WINE-DARK SEA also falls into a trope trap that I really don't like...the fated to be mated trope. I go out of my way to avoid books with this trope, because I have yet to see one that does it in a way that doesn't come across as apologist & rapey.

At first, I found myself skimming the Thalassa/Dorian chapters - because Thalassa loses her awesomeness quickly, becoming a pouting, foot-stomping, "No, I won't eat my food, I'm going to starve!" type heroine - and reading the passages about the Amazons, because they were great. Until I noticed another disturbing trend...that all of the Amazon subplots inevitably resulted in men arriving to Amazonia who wanted to rape them. The book opens up with pirates trying to capture them and sell them as sex slaves, and then there's the Greeks, led by Heracles and Theseus, who come to the island to steal Hippolyte's golden girdle and end up having a happy sex orgy until one jealous gay guy (and of course, he has to be gay) decides to commit murder out of jealousy and love for Heracles, thereby inciting a riot that leads to a bunch of Amazons being kidnapped as sex slaves/collateral. The ending cinched my dislike for this book. Bryan kills off some of the characters I did like, seemingly for shock value, and, of course, Thalassa and Dorian get their HEA.

I am glad I read this book, because it was different and now I know how I feel about it instead of lusting after that gorgeous cover and fantasizing about what might be. I read the synopses for the sequels, and I think that I might be willing to give this author another chance, because they look like standalones and book two is an interracial romance between a mer-woman and a Chinese man and book three is a contemporary paranormal between a female scholar and a mer-man. Depending on how that goes down, it might be a better premise for this book - especially considering that this was a debut effort, and the author would have had some time to better hone her craft. But I did not like WINE-DARK SEA at all. I desperately wanted to - the writing was beautiful at times and she wrote some kick-ass fight scenes (apparently she's into martial arts - it shows) - but I didn't.

P.S. The whole time I was reading this, I kept humming this song.